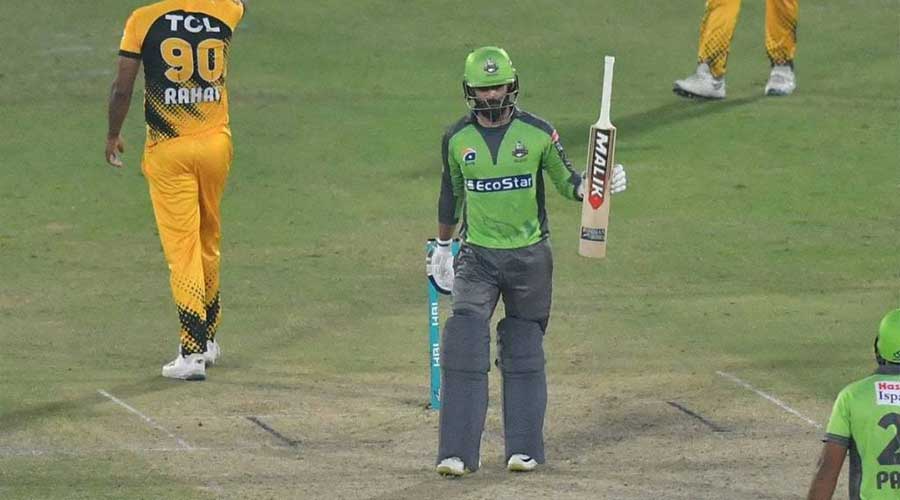 Lahore Qalandars grabbed their first playoff win in the history of HBL PSL competition, thanks to Professor Muhammad Hafeez and David Weise.

It was the second ball of the match when Shaheen Shah Afridi bowled Haider Ali and sent him back to the pavilion. In the fifth over Shan Maqsood was removed by Dilbar Hussain and next in line was Imam-ul-Haq.

It was a slow start by the Zalmi’s, however, Shoaib Malik and Faf du Plessis rescued Peshawar Zalmi and provided a 35-run stand before Dilbar Hussain took the wicket of Du Plessis.

Malik continued to resist till the 16th over when Dilbar dismissed him on 39 runs. In the final over Viljoen smashed 20 runs while facing Harris Rauf in the bowling end.

For Lahore Qalandars, Dilbar took 3/33, Shaheen Shah Afridi 2/18 whereas Haris Rauf and Weise conceded too many runs but picked up two wickets.

After losing wickets at an early stage Hafeez and Ben Dunk took the stage and added 55 runs partnership. The partnership was broken by Mohammad Imran when he picked up the wicket of Ben Dunk who managed to score 20 runs.

After Ben Dunk, it was Samit Patel who scored 20 runs in 17 balls and Rahat Ali showed him the pavilion.

For Zalmi Saqib Mahmood took three wickets, while Rahat and Muhammad Imran claimed one each.

Qalandars are now facing Multan Sultans and the winner will face Karachi Kings in the final on November 17th, 2020.