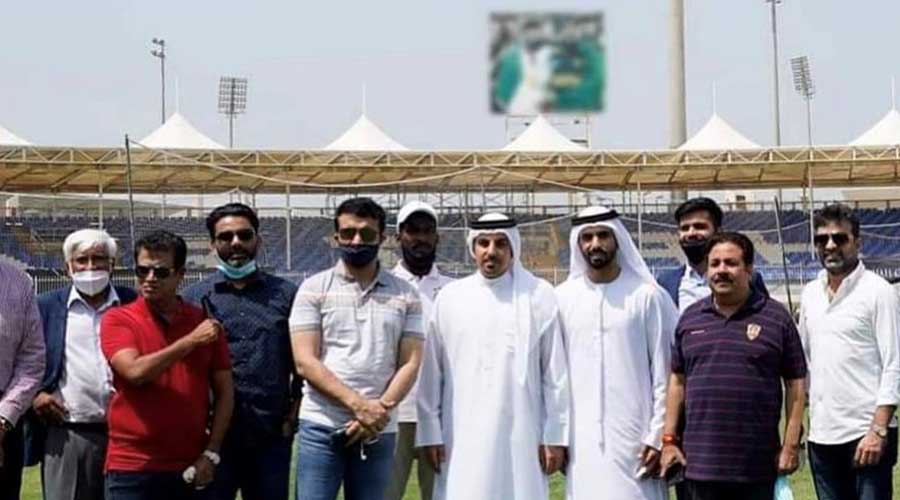 Sourav Ganguly posted the images of his recent inspection visit to Sharjah Cricket Stadium and blurs the photo of Pakistani players in the background that caught the attention.

Indian Premier League (IPL) is about to start and Sourav Ganguly the President of Board of Control for Cricket in India (BCCI) made a visit to the famous Sharjah Cricket Stadium in order to monitor the on-going preparation to host the 13th IPL edition.

The former Indian skipper and current BCCI President shared pictures of his visit to Sharjah Stadium on Instagram profile with a portray of Pakistani stars on the background. Soon after sharing the pictures on the social media platform, the cricket lovers spotted the blurred images on the background which was intentionally blurred by the left-hand batsman.

The photo Ganguly blurs on the background is the Pakistani winning squad of the Sharjah Cup which was played in 2003. The final match was between Pakistan and Zimbabwe, which Pakistan won by 68 runs to seal the event. Apart from Pakistan, three teams were included in that tournament which includes, Sri Lanka, Zimbabwe and Kenya.

Pakistan and India the arch rivals in every field have not played a bilateral series since 2011. The relationship between two countries keeps deteriorating and there is no hope of things getting towards normalization in the future. Furthermore, its been 14 years since Pakistan and India played a test match. The Pakistani players are also not welcomed for the IPL. The only IPL edition Pakistani players have played was the first IPL back in 2008.

On several occasions, Pakistan Cricket Board (PCB) requested BCCI to play series even on neutral venues but the aggressive stance of BCCI officials specifies that there is no hope of bilateral series between Pakistan and India.

Overall Pakistan enjoys a winning ratio against India. Pakistan and India both played 24 matches at Sharjah Cricket Stadium and Pakistan won 18 out of 24. I guess that is why Ganguly does not have a striking memory of this venue.