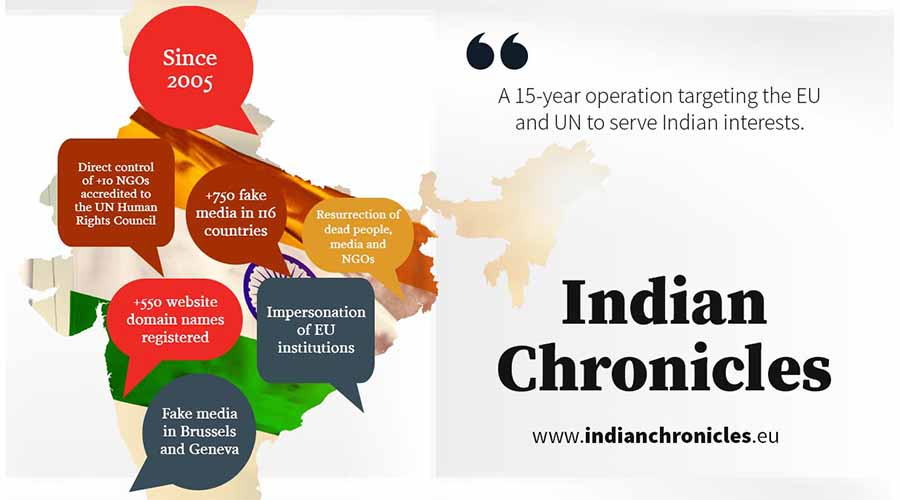 In a new investigation titled Indian Chronicles, the EU DisinfoLab has reported that over 750 Indian sponsored websites located across 119 countries have been working within the European Union and the United Nations for the last 15 years to discredit Pakistan globally.

As per the report the operation under the banner of Indian Chronicles started in 2015 and is still underway. The operation is led by Srivastava Group and amplified by ANI which is the biggest Indian news agency located in New Delhi. Under Indian Chronicles, their mission is to undermine countries in conflict with India in Asia, particularly Pakistan but also China.

“Indian Chronicles’ key objective is to undermine Pakistan internationally. To do so, they resurrected dead NGOs at the UN. They impersonated the EU. They laundered content produced by fake media to real media – and reached millions in South-Asia and across the world,” the report added.

The DisinfoLab report pointed out that the long-term objectives of the operation were to promote content against Pakistan and China and to strengthen the influence of India in international forums such as the EU and the UN.

Resurrection of UN-accredited NGOs and the hijacking of causes

The investigation found that Canners International, an NGO devoted to the promotion of food in cans, was now headed by former European Parliament President Martin Schulz, who said he had left politics.

“We soon found the NGO he was supposedly leading officially ceased to exist in 2007 and was now regularly speaking at the UN Human Rights Council to slam Pakistan,” the report said.

The report claimed that the only meaningful attention these op-eds get comes from the immediate repackaging by the ANI (Asian News International) Indian press agency, frequently citing these op-eds as genuine articles from the ‘Independent media EU Chronicle’.

The report also revealed that the Indian press agency protects the lobbying efforts which were made based on fake NGOs, with occasionally quite doubtful practices.

The content produced in Brussels and Geneva which was covered by ANI led DisinfoLab to Big New Network and the World News Network, an entire network of more than 500 fake local media in 95 countries that have facilitated reproduce negative iterations mainly about Pakistan.

“We also realised that the content produced was primarily targeted at Indian nationals, with an extensive coverage of these barely known “media”, MEPs and “NGOs” in Europe,” the report stated.