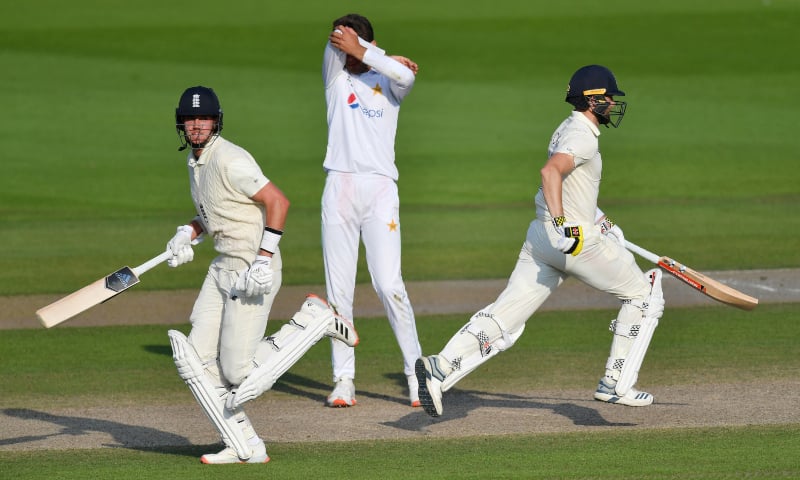 Chris Woakes and Jos Buttler lead England towards a fascinating victory in the first test against Pakistan after exceptional performance on the fouth day.

While making a partnership of 139 England successfully chased 277 runs target set by Pakistan.

Pakistan who was dominant for the first three days fell sluggish on the fourth day and gave away the match to the host. In the second innings, England were 117-5 and Pakistan was on course to triumph but the sixth-wicket partnership between Woakes and Buttler twisted the match to their favor. In a nerve reckoning battle, another twist came when Buttler was dismissed at 75 with 21 still required.

However, Woakes exceptional 84 not out rendered England a winner with three wickets to spare and lead the 3 match series with 1-0.

At the start of the game, a wicket fell early of Rory Burns (10) who was trapped by Muhammad Abbas. But later on Dom Sibley (36) and skipper Root (42) made a partnership of 64, only for a post lunch collapse to put Pakistan in control.

Yasir Shah struck again as he got stable Sibley and Ben Stokes who only made 9 runs. Ollie Pope scored 7 as Shaheen Shah took his wicket while Naseem Shah took out Captain Joe Root.

Despite the instant fall of wickets Buttler and Woakes went to play aggressive cricket, and eventually, Azhar Ali pushed fielders back to boundaries to stop the flow of runs.

Yasir Shah created a little excitement in the game while striking twice late in the game, but in the end, Woakes edge on Shaheen delivery to the third man and finds a boundary to get England over the line.

The victory was England 10th highest successful chase in test format. England who lost to West Indies in the first test have their noses in front as both teams moved towards the biosecure bubble of Southampton for the remaining two test games.