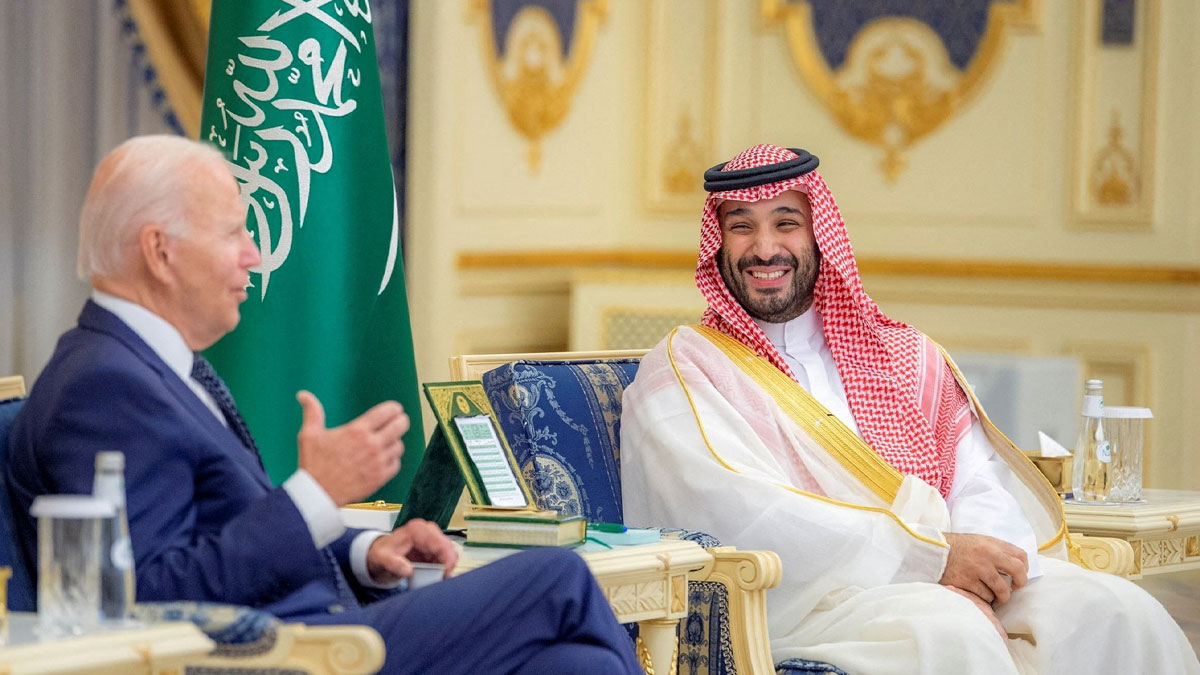 US President Joe Biden said Friday he raised the 2018 killing of dissident journalist Jamal Khashoggi “at the top of the meeting” with Saudi Crown Prince Mohammed bin Salman (MBS) in Jeddah, on day three of his first Middle East tour as president.

“What happened to Khashoggi was outrageous … I just made it clear if anything occurs like that again they will get that response and much more,” Biden said after meeting MbS, who US intelligence officials believe ordered the operation that led to Khashoggi’s death.

US President Joe Biden departed for Saudi Arabia on Friday where he had a controversial meeting with Crown Prince Mohammed bin Salman, the country’s de facto ruler.

Both the prince and his father, King Salman, greeted Mr. Biden.

Previously, he had promised to declare Saudi Arabia a “pariah” following the murder of journalist Jamal Khashoggi by Saudi agents in 2018 two years prior.

Despite the prince’s denials, US intelligence believed that he gave his approval to kill Kashoggi.

The leaders will talk about the availability of energy, human rights, and security collaboration.

The greatest oil producer in the world, Saudi Arabia, is attempting to mend fences after a surge in oil costs brought on by Russia’s conflict in Ukraine.

US pressure on Saudi leaders to agree to boosting production is anticipated.

The US applauded Saudi Arabia’s announcement late on Thursday that it would permit commercial flights from Israel to use its airspace.

The action opens up the kingdom’s airspace to all airlines that meet its overflight requirements and creates space for more flights to and from Israel.

This “paves the way for a more connected, stable, and secure Middle East region,” according to US National Security Advisor Jake Sullivan.

As the first US president to travel directly from Tel Aviv to Riyadh after decades of boycotting Israel in support of the Palestinians, Mr. Biden’s flight is considered as a minor but crucial indicator of Riyadh’s growing acceptance of Israel.

The first time since coming into office, Mr. Biden will meet Prince Mohammed when he travels to Jeddah, Saudi Arabia, on Friday evening.

The 79-year-old has so far insisted on speaking with King Salman, who according to US sources is Mr. Biden’s immediate counterpart.

White House representatives have declined to specify whether Mr. Biden will bring up the killing of Mr. Khashoggi, a US-based Washington Post journalist.

They opted not to specify whether or not the two would shake hands.

Some members of the US president’s own Democratic Party are furious about the gathering and want him to use it as an opportunity to criticize Saudi Arabia for its human rights record.

Senior House Democrat Adam Schiff stated last week that if he had been in Joe Biden’s situation, he would not have travelled to the nation or met Prince Mohammed.

The American resident was “butchered, chopped up into bits, and in the most horrible and planned manner,” according to Mr. Schiff. “I wouldn’t want anything to do with him until Saudi Arabia makes a major transformation in terms of human rights,”.

In an effort to justify his choice, Mr. Biden told reporters earlier this week in Jerusalem that anyone who doesn’t understand it in Saudi Arabia or elsewhere “hasn’t been around me for a while.”

The US president appeared to criticize the actions of previous President Donald Trump by saying that his trip to the Middle East, where he will also meet with leaders of Egypt, Iraq, and Jordan, provides a chance to correct the “error” of “drawing away from our influence in the Middle East.”

The US consulate in Jerusalem, which acted as a de facto embassy for the Palestinians before it was closed by President Trump in 2019, is one of the things the Palestinians want the US to do more to restart peace talks with Israel.