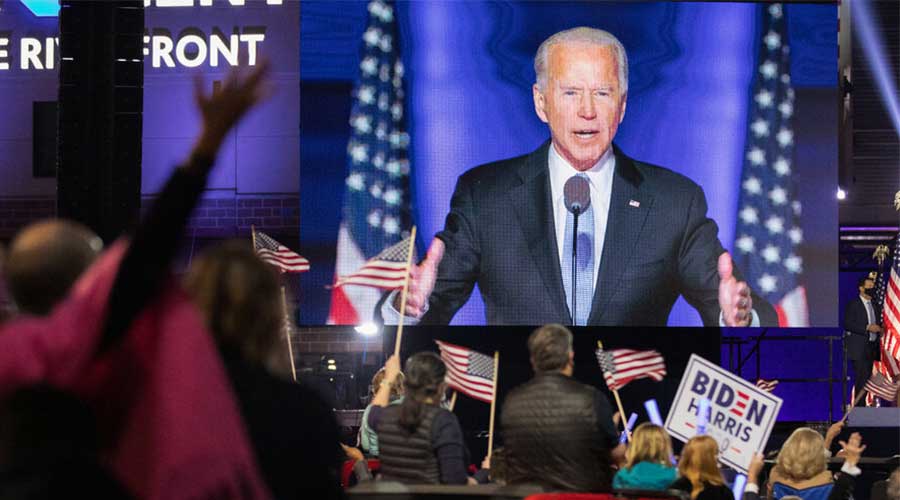 U.S. president-elect Joe Biden celebrated his win over Donald Trump after a cliff-hanger vote count in the US election 2020 and vowed to waste no time cracking down on the COVID-19 pandemic and called on Americans to set aside their differences once and for all.

“This is a time to heal in America,” Biden said Saturday night on stage in Wilmington, Delaware as a drive-in rally of masked supporters cheered.

Joe Biden said in a statement that he was “honoured and humbled” to be elected as a president. “In the face of unprecedented obstacles, a record number of Americans voted. Proving once again, that democracy beats deep in the heart of America,” Biden said.

It was now time to “put the anger and the harsh rhetoric behind us and come together as a nation”, he said. “It’s time for America to unite. And to heal.”

This was the first time since 1990 when the US president serves the nation for only one time.

The current US elections have seen the highest turnout since 1900. President-elect Joe Biden gathered more than 75 million votes so far and still counting, these are the most ever by any US presidential contender. Meanwhile, Donald Trump also won more than 70 million votes which are the second-highest in the history of the United States of America.

Donald Trump constantly raised concern regarding irregularities in the counting but did not submit any proof of election fraud, meanwhile he also falsely declared himself the winner of the election 2020 even though the voting count is still unfinished.

In this matter, the Trump lawyers submitted lawsuits in many states, as Joe Biden seemed on the nib of victory, said: “This election is not over.”

The turbulent election 2020 was fought in the midst of the COVID-19 pandemic where coronavirus cases and the death toll is on the rise throughout United States and Joe Biden accused President Donald Trump of failing to impose adequate actions to control the spread of coronavirus.

Joe Biden served eight years under Barrack Obama presidency and is all set for a return to the White House. At the age of 78 Biden will become the oldest president in American history, which was previously held by the man he has now defeated, Donald Trump, who is 74.

The new president will officially be sworn into office on 20 January after a changeover period in order to give them time to assign cabinet ministers and construct plans.

The ceremony will be organized to transfer power which is named as the inauguration. The ceremony will be held on the steps of the Capitol building in Washington DC. After the ceremony, the new president of the USA will make his way towards the White House to start their four-year term in office.