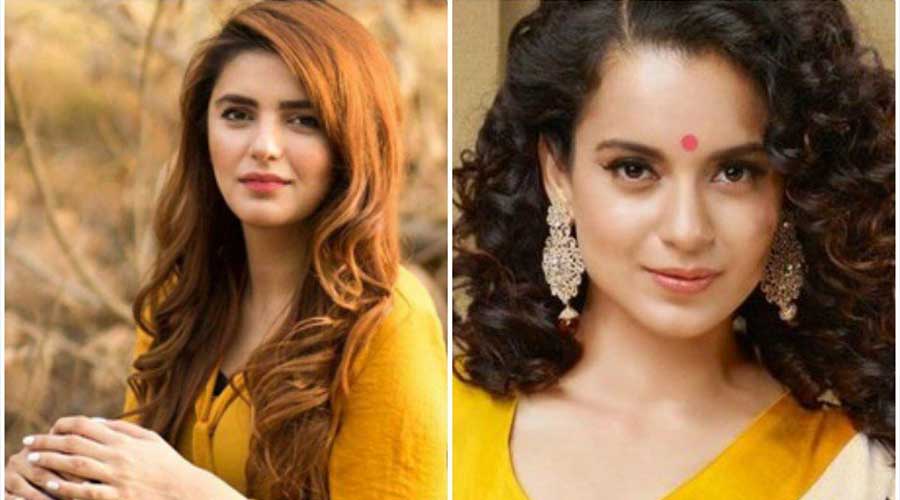 Momina Mustehsan fearlessly called out Kangana Ranaut for her nonsensical and hateful anti-Pakistan and Islamophobic sentiments.

Kangana Ranaut is well known for her bold and controversial statements that are sometimes borderline hate speech. This actress is also known for the overconfident opinions regarding anti-Pakistan stance. She has been seen fighting for justice for Sushant Singh Rajput after his suicide two months ago but she dragged Pakistan into it to validate her arguments.

She said that Pakistan should not be allowed to spread religious prejudice or hatred in India. She commented on twitter upon the release of Alia Bhatt’s movie trailer. The anti-Muslim comment is nothing new for her. She further said that Mahesh Bhatt should replace the word “GURU” with “MAULVI” in his upcoming movie. She said that the Kailash scandal should have been replaced by the Mecca scandal.

She tweeted, “Nice observation, can they replace Guru with Maulavi and Kailash scandal with Macca scandal?Does Sadhus lynchings have something to do with these prejudices? Why Pankistani Pimps are allowed to spread religious hate and prejudices in Bharat? -KR #Sadak2 #sadak2trailer”.

On her all such arguments, Momina Mustehsan smashed back at Kangana Ranaut and advised her to stay away from bringing Pakistan into the argument to substantiate her point. She tweeted, “Why does Pakistan get dragged into all ur arguments? It serves no purpose, but takes away frm ur mission to rightly get justice for SSR, fight nepotism, ur own internal state politics & curb religious hatred & prejudice. Justice cant be achieved by propagating regional hatred”.

Why does Pakistan get dragged into all ur arguments???‍♀️ It serves no purpose, but takes away frm ur mission to rightly get justice for SSR, fight nepotism, ur own internal state politics & curb religious hatred & prejudice. Justice cant be achieved by propagating regional hatred?? https://t.co/vI4VkvalgW

According to the Ko Ko Korina Singer, Kangana is trying to validate her point by pushing Pakistan into the debate in order to get justice for Sushant Singh Rajput. She also said that the actress should focus on the ways to limit religious hatred and prejudice in India and that religious hatred is not tolerable in any way.