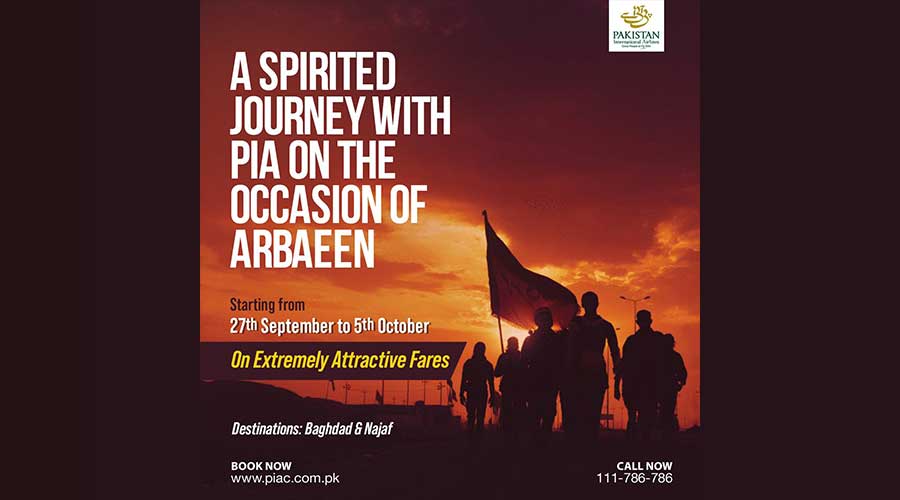 The Pakistan International Airline (PIA) publicized on Tuesday that the carrier is going to operate special flights to Iraq’s holy cities of Najaf and Baghdad in order to help people who wish to perform the religious rituals of Arbaeen.

The spokesperson of the Pakistan International Airline said that the timetable of the flight has been publicized and according to schedule people can now travel to Najaf and Baghdad from Islamabad, Lahore and Karachi airports. The national flag carrier is started its service from September 27 till October 5.

The PIA revealed this news on the official Twitter account which reads, “PIA brings you direct flight to Najaf and Baghdad on the holy event of Arbaeen 2020. Get your tickets now on amazingly reduced rates. Book now: pian.com.pk. You can also call us on +92 021 111 786 786 #PIA #PIACares #GreatPeopleToFlyWith.”

PIA brings you direct flights to Najaf and Baghdad on the holy event of Arbaeen 2020.
Get your tickets now on amazingly reduced rates.
Book Now: https://t.co/zzPi4NyCFA. You can also call us on +92 021 111 786 786 #PIA #PIACares #GreatPeopleToFlyWith pic.twitter.com/4il7POGYKV

According to the spokesperson, the special flights operation decision was started on the instruction of the Federal Minister for Aviation Ghulam Sarwar Khan to support pilgrims.

To run things smoothly the CEO of PIA Arshad Malik also met with Iraq’s ambassador to Pakistan to discuss and confirm an immediate beginning of the special flights.