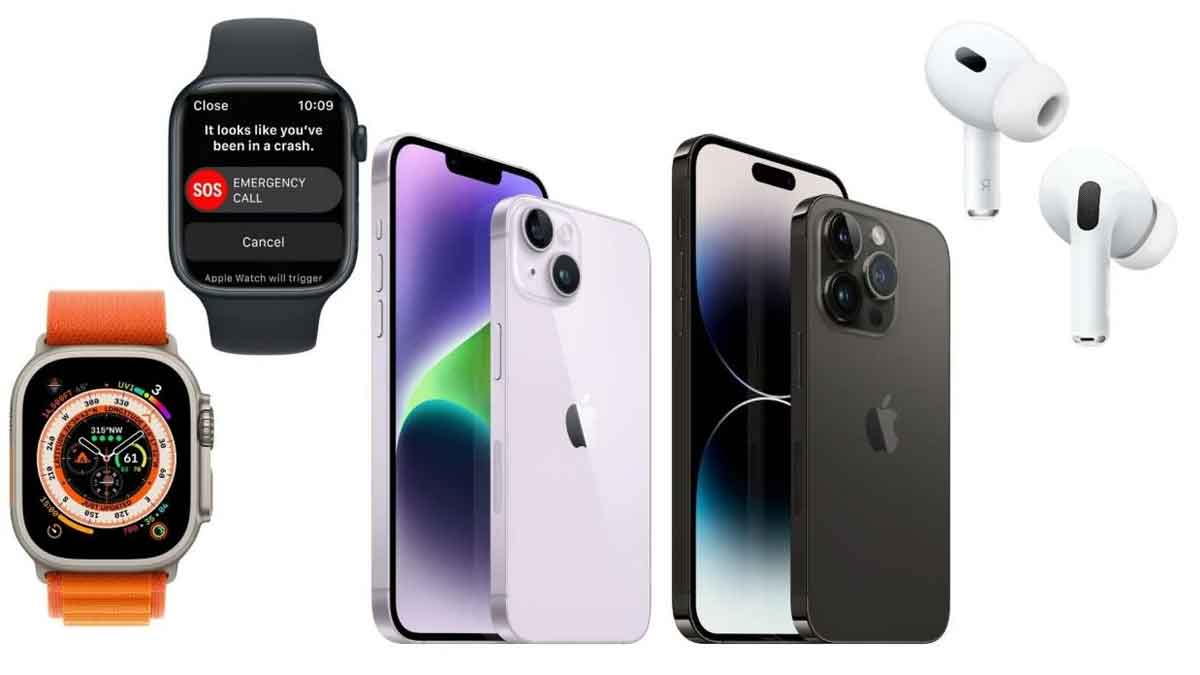 In addition to the new iPhone 14 series and three new Apple Watch versions, including the long-rumored Apple Watch Ultra, Apple also unveiled the new AirPods Pro headphones during its Far Out event.

Since the iPhone 14 and iPhone 13 both include an A15-series Chipset and a notch, there aren’t many significant improvements over the earlier models. However, Apple did release a new Plus variant with a larger 6.7-inch screen and longer battery life.

The iPhone 14 and iPhone 14 Plus start at $799 and $899 respectively. On September 9, you may place a preorder for them; the iPhone 14 will be on sale starting on September 16 and the Plus will go on sale on October 7.

The design of the iPhone 14 Pro and Pro Max replaces the notch with a pill-shaped cutout that contains the camera and under-display FaceID technology, among other significant improvements. Apple refers to this area as the “dynamic island” since notifications will appear and move around it.

The Pro range also features a 48-megapixel rear camera with a quad-pixel sensor, a brighter display, longer battery life, and a more powerful A16 CPU. The iPhone Pro and Pro Max will also have always-on displays from Apple, which will darken your lock screen background when activated in order to keep showing notifications without using up too much power.

The prices for the iPhone 14 Pro and Pro Max are $999 and $1,099, respectively. Beginning on September 9, you can place a preorder for them. Meanwhile, both devices will be available on September 16 in stores.

Apple said that the iPhone 14 versions released in the US will not come with real SIM trays. Instead, the iPhone 14 will make use of an eSIM, sometimes referred to as a digital SIM card. Apple claims that eSIMs are more secure and should make it easier for consumers to transfer between carriers, but for those accustomed to the ease of taking their SIM card out and inserting it into a different phone to change services, it may be more difficult.

For athletes participating in extreme sports, Apple’s brand-new Watch Ultra provides a more durable design. It boasts a new customizable action button to choose between sports and a larger 49mm titanium case to safeguard it from damage. Users of Ultra may also track their underwater dives with the new Oceanic Plus App.

The battery life of the Apple Watch Ultra is up to 36 hours on a single charge. Later this year, Apple plans to launch a battery optimization function that will improve the Ultra’s battery life to 60 hours.

Preorders for the Watch Ultra will be accepted starting today for $799, with shipping beginning on September 23.

The iPhone 14 Can Send Emergency Messages Over Satellite

For use in emergency scenarios in the US and Canada, Apple has included satellite connectivity to the new iPhone 14 and 14 Pro. As long as the sky is clear, Apple claims you should be able to point your phone towards the closest satellite to send an SOS message to a nearby emergency service if you need assistance. It is also stated that for two years, the feature will be offered without charge on new phones.

Two new temperature sensors—one on the rear and one beneath the display—in Apple’s upcoming Watch Series 8 are aimed at assisting in measuring fertility. Every five seconds, the watch takes your temperature, and according to Apple, it can detect temperature differences as little as 0.1 degrees Celsius.

Additionally, a new crash-detection feature detects when an automobile crash has occurred and offers the option to call for assistance. In order to save battery, Apple also unveiled a low-power mode that disables several functionalities, such as the always-on display.

The Watch Series 8 is available for $499 for cellular and $399 with GPS. Preorders are now being accepted, and delivery will begin on September 16th.

The Apple Watch SE Is Back

Apple has unveiled the Apple Watch SE of the next generation. It contains several of the same features as the Watch Series 8, including crash detection, and a new S8 chip that makes it 20% faster than the 2020 model.

Before it becomes available on September 16th, you can preorder it for $249 with GPS or $299 with cellular service today.

The “most advanced” AirPods Pro yet have been released by Apple, according to CEO Tim Cook. They have twice as much noise cancellation power as the previous generation, a redesigned H2 chip, and spatial audio.

There are speakers embedded on each earbud and the charging case, so you can find them using the Find My app, in addition to the longer listening time of 6 hours on a single charge (or 30 hours with the charging case).

On September 9, you may preorder the AirPods Pro for $249; they will be accessible on September 23.

iOS 16 And WatchOS 9 Are Coming On September 12th

The release of watchOS 9 and iOS 16 will begin on September 12. While watchOS 9 adds a slew of new fitness monitoring measures, iOS 16 enables new features for the lockscreen, including widgets and notifications that roll up from the bottom of the screen.