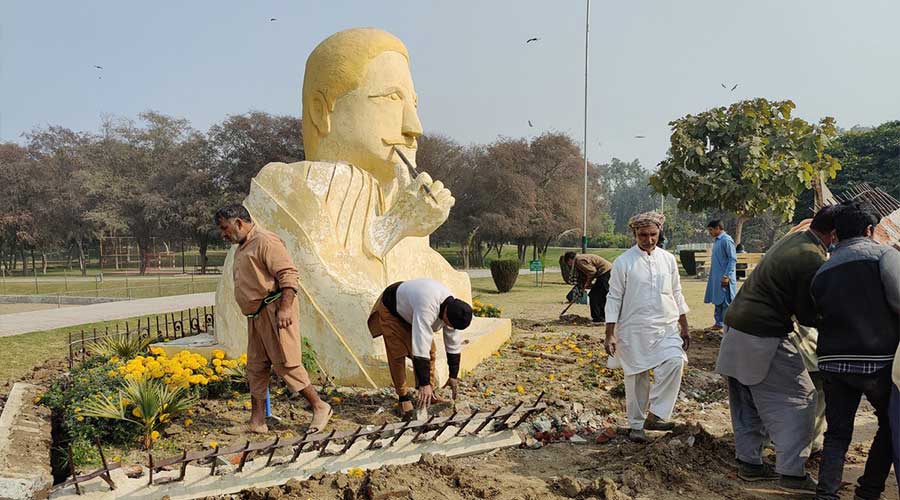 Two officials of the Parks and Horticulture Authority (PHA) Lahore were suspended by the Punjab government on Tuesday after an outrage on social media over a recent sculpture of the ‘poet of the East’ Allama Iqbal constructed in the Gulshan-i-Iqbal Park of the city.

The two officials were suspended after being found guilty of “inefficiency and negligence of duty” stated the press release.

Shortly after its placement in Gulshan-e-Iqbal Park, Lahore, the sculpture of Iqbal attracted the attention of the public.

What captured the attention of the viewer was how the artist had taken liberty with the subject by creating the sculpture in such a way that it did not seem to resemble the man himself.

Soon, with several people commenting on the surprising artistic work, the artwork spread through social media.

However, despite the poor creation of Iqbal’s sculpture, it came to know that the artwork seemed to be an honest effort to pay tribute to Allama Iqbal by the gardeners of the park on their own.

Yasir Gillani, chairman of the PHA, had tweeted yesterday about the whole issue.

Dear, this is prepared by maalis at their own , they made it in shere love for Iqbal and to pay homage from their heart. Authority didn't approved or even paid a single penny for it.
WE WILL ADDRESS IT but can anyone see from maalis eye's, their love and their عقیدت, pic.twitter.com/qAdf0Nw4E9

Regarding the sculpture, the Chief Minister of Punjab Sardar Usman Buzdar took very serious notice of the installing of Iqbal’s artwork in the park and gave orders to instantly remove it from Park.

And issued a statement that whoever showed negligence will be held accountable and hence resulted in the suspension of two officials.