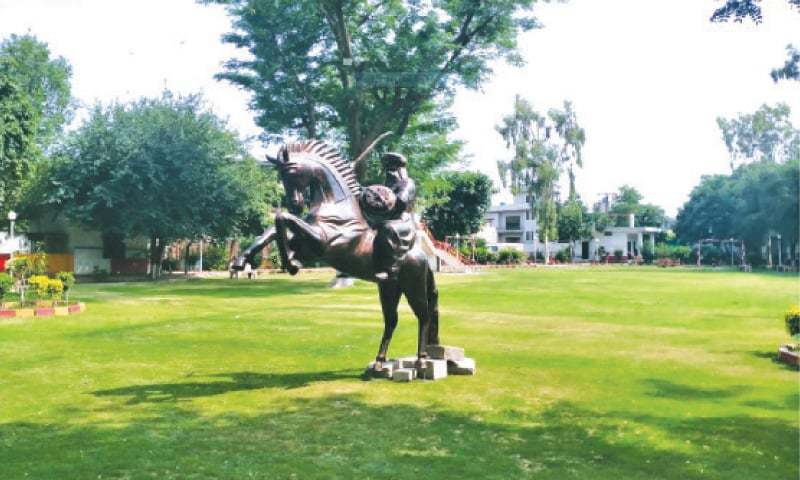 Dirilis Ertugrul has stolen everyone’s hearts across Pakistan and the peak of the obsession with the Turkish season was on display when members of a community of an area in Lahore installed a life size statue in their neighborhood to pay tribute to the main character Ertugrul Ghazi.

The statue that has been built by community members exist in the Maraghzar Housing Society, Lahore situated along the Multan Road. The statue is of a man carrying a sword and riding a horse.

The president of the Maraghzar Housing Scheme, Muhammad Shahzad Cheema said that some of the residents floated the idea of paying a tribute to Ertugrul Ghazi, and then he decided to erect the statue. He further said that the statue has been made with fiber and metal in the city Kamalia of Toba Tek Singh District.

Mentioning the value and cost of the statue he said, “I won’t mention the cost of these statues; otherwise, their value would get the attention of the public. I went to Kamalia myself to place the order for these statues.”

Then he mentioned the chowk where this statue has been erected will be called Ertugrul Ghazi Chowk. Two statues will be present to depict the main character, Ertugrul Ghazi. One, that is unveiled and second, that is going to be erected soon at a central place.

The love for the Turkish series among Pakistan is hidden to no one. Even Prime Minister Imran Khan especially suggested to the youth of the country to watch this series. The producer of this series coordinated with Pakistan in order to collaborate and produce some series collaboratively.