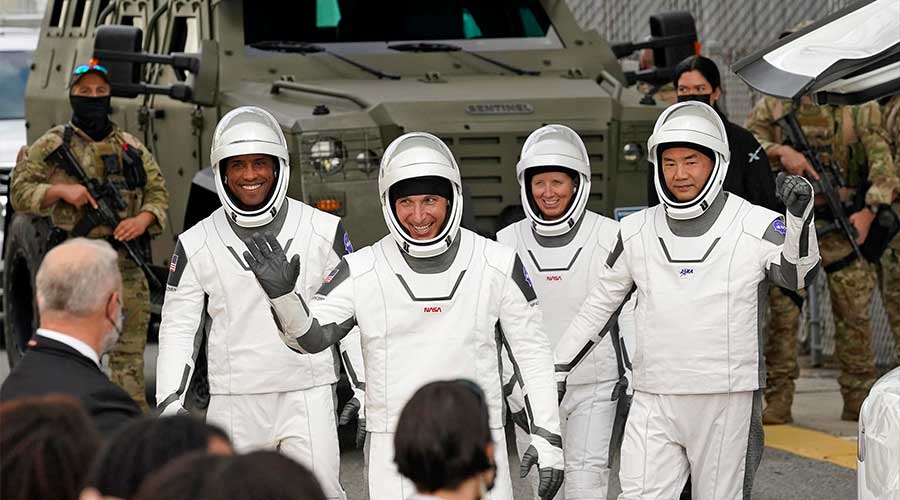 Four astronauts aboard the SpaceX Crew Dragon capsule Resilience have arrived at the International Space Station, circling 262 miles above Earth, where they will stay until spring.

The American high-tech entrepreneur Elon Musk’s company SpaceX, launched four astronauts on a flight to the International Space Station which was NASA’s first mission in which a crew was sent into orbit using a privately owned spacecraft.

The Crew Dragon capsule is newly designed by SpaceX, lifted off on a SpaceX Falcon 9 rocket from NASA’s Kennedy Space Center in Cape Canaveral, Florida.

After an hour of takeoff, the astronaut Mike Hopkins expressed from Crew Dragon to SpaceX mission control that “That was one heck of a ride”.

Crew Dragon with the progressively raising its orbit through a sequence of onboard thruster firings, and aiming to anchor with the International Space Station has arrived at ISS after circling 262 miles above the earth, where the astronauts will stay till spring.

The flight is another milestone for SpaceX flying its first fully operational mission.

The Resilience crew included three astronauts from NASA and one from the Japan Aerospace Exploration Agency. They were mostly passengers during the flight to Crew Dragon, which usually flies without human input and docks to the ISS autonomously.

SpaceX founder and CEO Elon Musk did not attend the launching ceremony after announcing last week that he had received contradictory results on four separate coronavirus tests. Previously, the Tesla founder remained dismissive of COVID-19, and also called the coronavirus pandemic as “dumb” and on different occasions tweeting misinformation about viral infection.

However, US Vice-President Mike Pence attended the launching ceremony and stated that under the presidency of Donald Trump, America had “renewed our commitment to lead in human space exploration”.

The newly President-elect Joe Biden also congratulated and tweeted that the launch was “a testament to the power of science.”