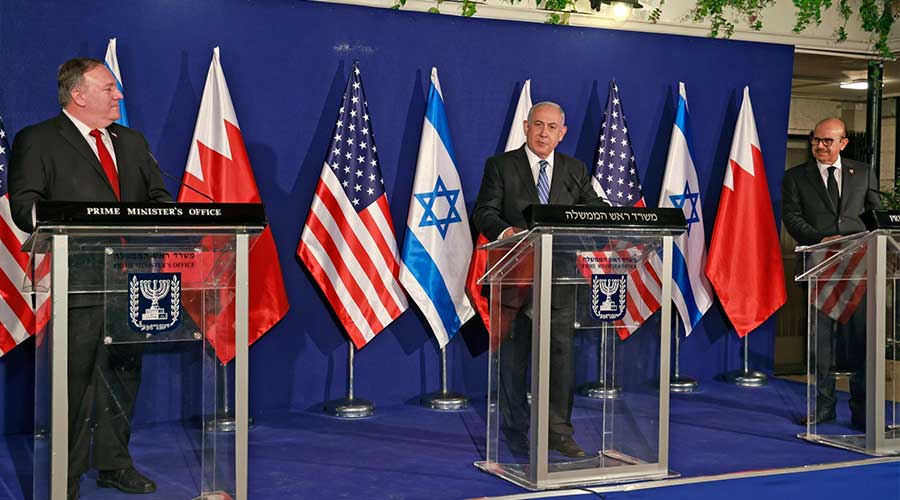 Bahrain and Israel have agreed to open embassies, establish online visa systems and launch weekly flights between both countries soon.

The foreign minister of Bahrain called for fresh Israeli-Palestinian peace talks during a meeting in Israel with the Prime Minister of Israel Benjamin Netanyahu and US Secretary of State Mike Pompeo.

Bahrain’s Abdullatif al-Zayani stated that the historic US-brokered deals the Bahrain and UAE had made an agreement to normalize ties with Jewish state which will foster a dawn of “peace for the entire Middle East”.

The foreign minister also said that “to achieve and consolidate such a peace, the Palestinian and Israeli conflict needs to be resolved”. In his official visit to the Jewish state, he also commented that “I therefore call for both parties to get around the negotiating table to achieve a viable two-state solution.”

During the joint press conference where both sides agreed to open embassies, US Secretary Mike Pompeo and Israel PM Netanyahu stood by with Bahrain foreign minister.

Mike Pompeo, the top diplomat of Donald Trump who is on a farewell visit to US top ally Israel did not mention any disputes between Palestine and Israel, who have protested his visit to a Jewish owned business in the occupied West Bank.

Mike Pompeo in his Jerusalem visit has no scheduled meetings with the Palestinian leaders, who sturdily rejected US President Donald Trump’s attitude towards the Israel-Palestine conflict, not only that the acceptance of Jerusalem as Israel’s capital by the Trump administration also angered Palestinians.

Despite talking about peace talks between Israel and Palestine, Pompeo instead stressed the need to work together in order to deal with common enemy Iran, which the United States targeting a new sanction.

Iran is “ever more isolated and this shall forever be until they change their direction,” US Secretary Pompeo said.