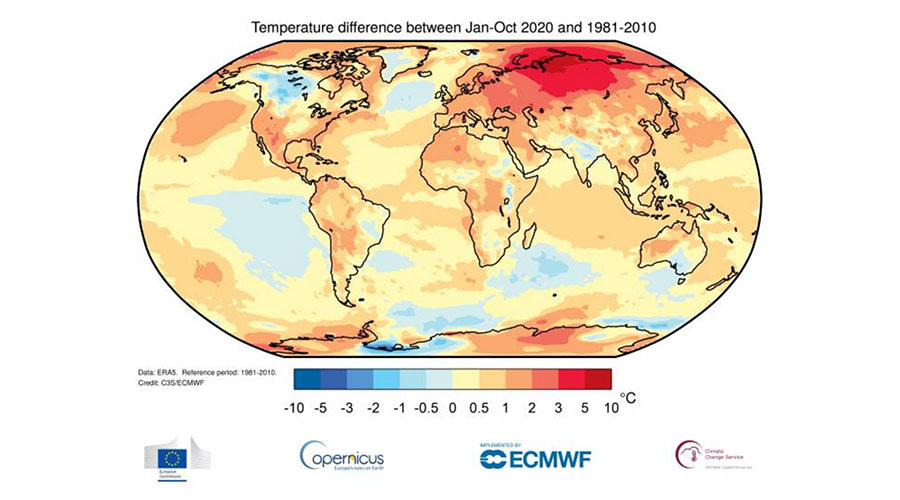 The year 2020 has been declared one of the three hottest ever recorded, even could top the record set in 2016, the United Nations said Wednesday.

According to the statement by the United Nations, this year is on course to be one of the three warmest ever recorded and could even top the record set in 2016. The past six years, 2015 to 2020 are called to be the warmest years since modern records began in 1850.

The UN’s World Meteorological Organization said in its provisional 2020 State of the Global Climate report that the past six years, 2015 to 2020, are therefore set to make up all six of the hottest years since modern records began in 1850.

“2020 has, unfortunately, been yet another extraordinary year for our climate,” said WMO secretary-general Petteri Taalas.

“The average global temperature in 2020 is set to be about 1.2 C above the pre-industrial level,” said Taalas.

The WMO said 2020 seemed on course to be the second-hottest year ever but the difference between the top three is small and the picture could change once this year’s data sets are complete.

The years from 2015 to 2020 are therefore individually “likely to be the six warmest on record”, the report said.

UN Secretary-General Antonio Guterres said, “Apocalyptic fires and floods, cyclones and hurricanes are increasingly the new normal,” he said in a speech at Columbia University in New York.

“Humanity is waging war on nature. This is suicidal. Nature always strikes back and it is already doing so with growing force and fury.” Taalas said that 2020 saw “new extreme temperatures on the land, sea and especially in the Arctic.”

“Wildfires consumed vast areas in Australia, Siberia, the US West Coast, and South America. Flooding in parts of Africa and Southeast Asia led to massive population displacement and undermined food security for millions.”