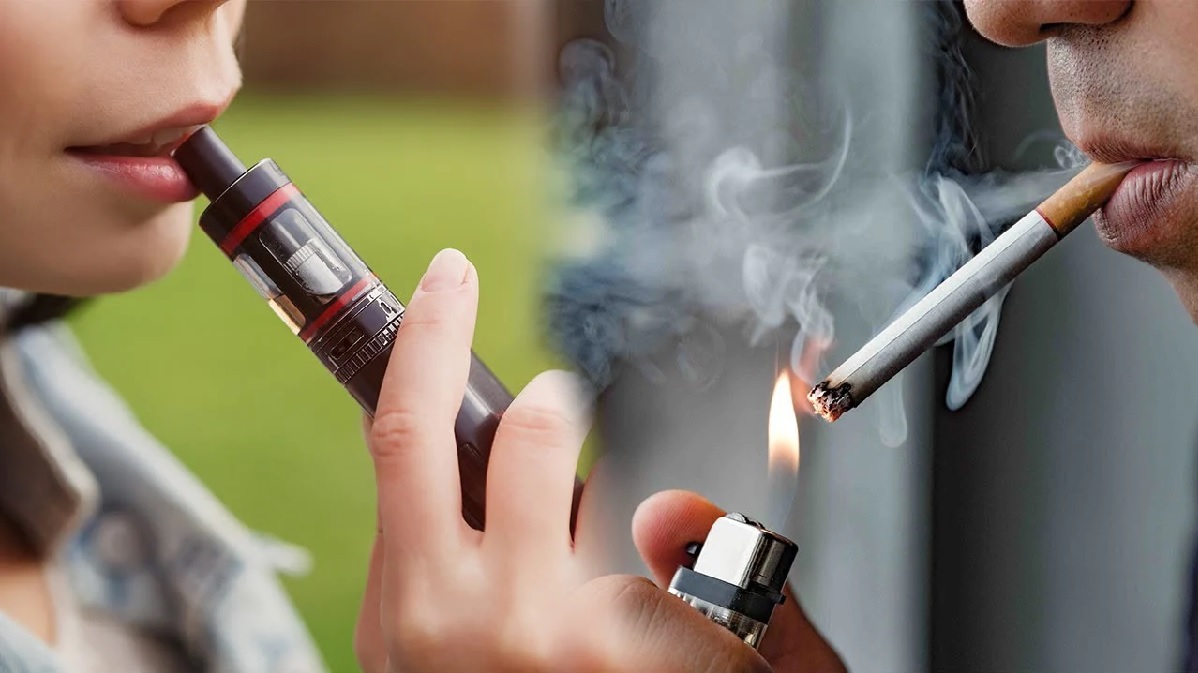 Tobacco consumption has been considered as one of the leading causes of death globally. Researches have proved serious health hazards of smoking yet adult smoking prevalence worldwide in year 2020 was 32.6% and 6.5% among men and women, respectively. The percentage is still believed to be increasing to an alarming extent annually. In the recent years, vaping has become a new craze as an alternative to smoking cigarettes mostly in young adults with an age range between 17 to 35. Vaping is another form of nicotine intake, but it is being considered less harmful as compared to smoking. In this blog you will learn about the difference between vaping and smoking.

Smoking is an act of inhaling puff from a cigarette through mouth and exhaling through mouth or nose with a significant amount of it reaching the smoker’s lungs. On the flip side, vaping is the process of inhaling nicotine in a vaporized form. Vaping uses an E-juice or a vape oil it can be chosen as per user’s taste. It has an option to add some flavors of your choice which cannot be availed while smoking. In both the cases, a sufficient amount of  smoke and vapors go to user’s lungs causing nearly an equal damage.

Differences between Vaping and Smoking

Smoking and vaping differ in their mode of delivery. Smoking is carried out by burning of the tobacco or dried parts of plants enfolded within cigarette rolls, pipes or bongs through partial combustion. On the other hand vaping uses vape juices commonly known as vape oils or e-liquids that are purchased separately and administered in a vaping device often called as an e-cigarette or a vaporizer.

These vaporizers are powered by using batteries. When the vaporizer is turned on the liquid is heated by an inbuilt coil to produce vapors. These vapors then move from the cartridge of the vaporizer to the vapor’s mouth. Since the cigarette uses the process of partial combustion it is considered more harmful while vape do not involve burning of the substances making it comparatively safer.

According to the recent studies, vaping is being used an alternative for the chronic smokers who are struggling to give up on smoking considering the less harmful effects of vaping. Smoking involves the incomplete combustion of tobacco, which means burning with a limited supply of oxygen this gives off some really hazardous products such as carbon monoxide which is highly toxic and injurious to health.

Cigarette smoke contain high amount of toxins, as per researchers it contains 7000 substances out of which 250 were studied to be extremely harmful while 70 were proven to have carcinogenic compounds that are main cause for cancer of lungs and many other body parts. Some of the common toxins found in a cigarette smoke include Ammonia, hydrogen cyanide, lead formaldehyde and benzene. Unlike smoking vaping doesn’t involve combustion process rather it involved vaporization of an e-juice. Moreover vaping contains ingredients such as polyethylene  glycol, which are FDA approved that advocates  its safety. E-juice can be of consumers choice, so a person can easily opt for a safer option that have a minimal risk of becoming a toxin.

There is a misconception about the nicotine consumption that smoking involves nicotine while vaping doesn’t. But the fact is that both smoking and vaping involves nicotine, which is an addictive substance and this is why a person becomes addicted to smoking or vaping. However, smoking has a fixed amount of nicotine while in case of vaping a person can adjust the amount of nicotine by selecting the ingredients of his own choice. This is the good and a bad trait of vaping simultaneously.

Smoking has comparatively more long term risks than vaping. According to CDC around 480,000 deaths a year due to smoking. Vaping, on the other, due to it’s less harmful ingredients have low potential long term risk. But if the ingredients of vaping include Volatile organic compounds, it becomes equally harmful for health.

Similarities between Vaping and Smoking

Smoking and vaping both are the sources of nicotine. They both cause a person to become addicted to nicotine consumption. Vaping can lead a person to Smoking and sometimes vaping is used to quit smoking and it proves helpful. Considering the health, both vaping and Smoking has negative effects on health and they can become a cause of multiple diseases like cancer, stomach ulcers, Parkinson’s disease and many other chronic health conditions are associated with smoking as well as vaping.

Read More: Working out in the afternoon or evening may help control Blood sugar – About Pakistan

Is vaping actually safer than smoking

Vaping can be considered 85% safer than smoking still it doesn’t make it completely safe to consume on regular basis. Researchers have found that vaping can also pose serious threat to health and mostly it happens when vaping is modified by using substances like 9-delta tetrahydrocannabinol. When THC is consumed in a huge amount it imposes psychoactive as well as intoxicating effect. So it should be used in moderation. But if the comparison is carried out between vaping and Smoking, vaping would definitely be chosen as a healthier option.

Many researches back up the fact that smoking is the leading cause of lungs cancer. It is due to the toxins that are released as a result of incomplete combustion. It is very well said that Health is wealth because disease can be an added financial burden. To stay healthy it is better to avoid both, smoking and vaping. Since vaping is a new trend and researches are still going on to study the effects of vaping in detail, but so far vaping is considered as a better option.