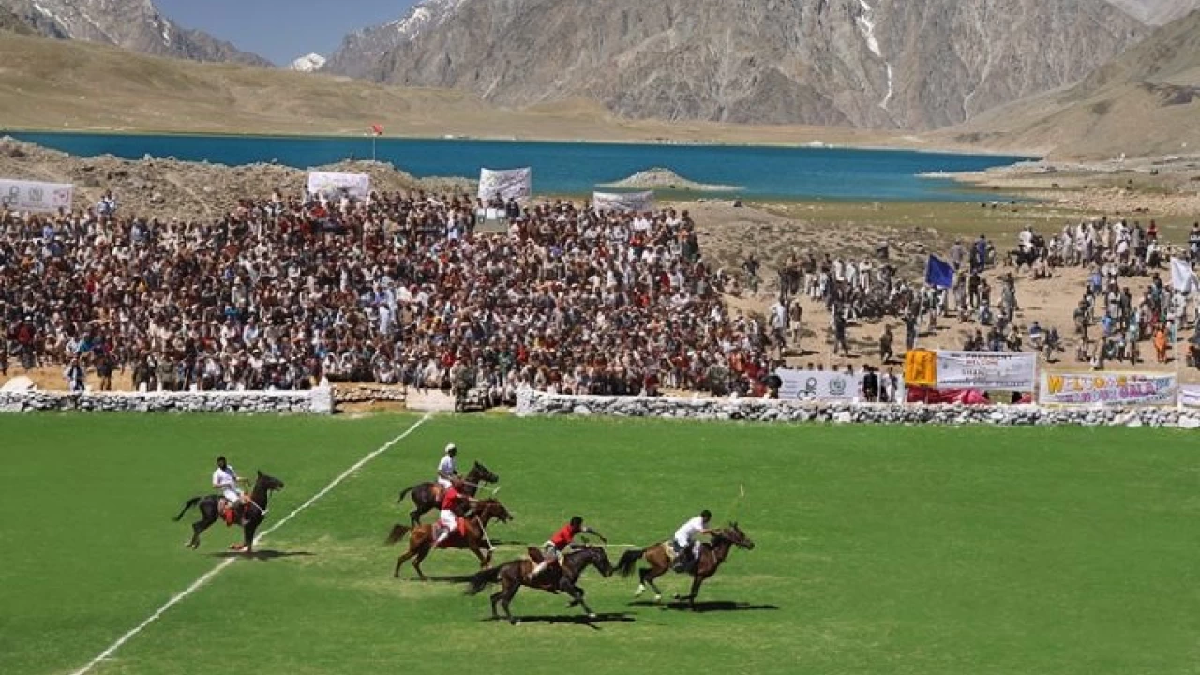 Shandur Polo Festival is an incredible festival celebrated every year by the tribes of Gilgit and Chitral in the northern areas of Pakistan. The tribes of the regions of Gilgit-Baltistan and Chitral meet at the Shandur pass every year during the summer season. There is a beautiful polo ground near Shandur where a free style unique polo is being played between different teams of the region. This polo ground is known to one of the highest polo grounds in the world with a height of 3,700 meters. The Shandur Polo Ground is located near to Shandur Lake. Shandur festival depicts the unique cultural diversity of Hindukush Mountain ranges.

It takes place from 7th to 9th July and people from all over the world visit Shandur during festival days. Polo tournament is played between polo teams of Gilgit Baltistan and Chirtal Districts. This festival is organized and financed by the Gilgit Baltistan Government and Upper Chitral District. The festival also has other activities like folk music, dancing and a camping village is set up.

Read More: The Unique Culture And Traditions of Kashmir – About Pakistan

Polo is an equine sport with its origin dating back to the 6th Century BC. Polo was originally a training game for cavalry units for the elite troupes including King’s Guards. In 13th century, it was introduced into South Asia. Polo word is derived from Balti language meaning “Ball”. The English word ‘Polo’ is, in fact, a Balti word meaning ‘Ball’. In ancient times, the game was played without any rules, but today the game has six players on each side with the match time of one hour in total with a ten-minute break. It was played in 1936 for the first time. Shandur Pass is a unique and mesmerizing place in itself with most beautiful scenic beauty in the world. Supporters from different regions travel long distances from remote areas of the provinces, to watch the thrilling game and cheer on their team. As such, the event offers a captivating intuition into the lifestyle of the people of this region.

What Is Shandur Polo Festival Famous For?

The Shandur Polo Festival is well-recognized for the harshness between the teams during matches. Injuries to players are likely to happen. The polo ground of Shandur has a length of 200 meters and a width of 56 meters as compared to an old-style polo pitch, the ground is much smaller.

The three-day Shandur festival was organized by the Khyber Pakhtunkhwa Culture and Tourism Authority (KPCTA).  Along with exciting polo matches, the super event also showcased traditional, cultural and exciting activities including music and dances. Chitral being the most peaceful region, attracts large number of domestic and international tourists yearly.

The festival provides a mind blowing cultural experience in the Hindukush mountain ranges. A beautiful tent village is usually set up, where living and lodging facilities are provided to both foreign and domestic tourists during the three days festival.

Tourists from all over the country flocked to the area to enjoy the festival. People including senior civil and military officials, local administration officials and a large number of locals attended this polo festival event.

During the event, the paragliders and paratroopers receive special tributes from the audiences at the inaugural ceremony that is jointly organized by the Khyber-Pakhtunkhwa government and Frontier Corps North.

The polo teams then usually march past the opening ceremony while children from different schools recite the national anthem in the inaugural ceremony. On this occasion, local artists also perform Kalash, Chitral and Khattak dances and songs to fully vitalize the culture of the Kalash and Chitral.

Read More: Trekking to K2 base camp in Pakistan – About Pakistan

This is a traditional meal found in Gilgit Baltistan, especially in Skardu. This tastes delicious when eaten at an altitude that is high above over there, it’s warming and satisfying when it’s cold outside. Its name is specifically given as Balay because of it is thick hearty and wars almost like a gravy

To add flavor to it, the goat meat broth is used and there are hearty gummy textured noodles and small bits of meat mixed within it giving a delicious taste. It is a great way to begin a traditional Baltistan food meal in Skardu during the festival. There are other yummy food items as well, including Mulida, Chapshoro and Momos.

Therefore, Shandur Polo festival is a traditional and cultural depiction of Chitral and Gilgit Baltistan. It has an amalgamation of traditions of both areas. Taking place in a beautiful and mesmerizing valley near Shandur Pass, this Festival is attended by thousands of people every year including locals as well as foreigners. Therefore, it is a heaven for those who loves the combo of sports and nature!