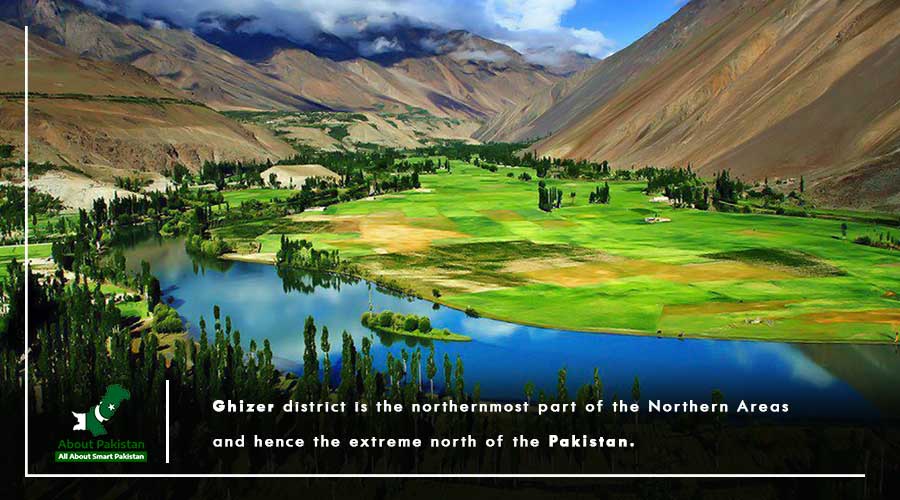 Ghizer valley is the westernmost part of the Gilgit-Baltistan region or the Northern Areas and hence the extreme north of Pakistan. Gahkuch is its capital city and a small town the lies on the way to Ishkoman valley.

The valley borders Chitral to the west and Gilgit to the south and serves as a crossroads between the two via Shandur Pass. Its Darkut Yasen/Ishkoman Valley serves as a crossroads between Tajikistan and China via the Broghil Pass. Ghizer borders Tajikistan to northwest and China to the northeast. The district comprises of Gupis, Yasen, Phander (Golaghmuli), Punial and Ishkoman Valleys.

The district is located more than 100 km north of Gilgit city. Due to the positioning of the district, it is a multi-ethnic district and home to five different regional languages including Shina, Khowar, Wakhi, Gojri, and Burushaski. There also Wakhi Tajik speakers in Darkut Yasen Valley. The languages are spoken in over a dozen different accents. However, the three languages Wakhi, Khowar, and Burushaski are among the most vulnerable languages due to the drastic decrease in the number of its speakers. According to a recent report of Pakistan District Education Rankings, Ghizer ranked 10 out of 148 districts in terms of literacy level.

The valley is located between the world’s greatest mountain ranges, namely the Hindu Kush and the Karakorum. The area has an imprint of its surrounding areas and is steeped in rich culture and indigenous traditions. The place is the origin of the iconic and renowned Gitgit cap. Two other iconic folk dresses of the region are Khoi and the woolen cloak Shokah.

The people of Ghizer valley are peaceful and love their culture as it inspires positive attributes of love, mutual respect, peaceful coexistence, and humanity. The enthusiasm and generosity of the inhabitants show their deep respecting psyche accompanied by the enthralling beauty of the place which the world is so eager to witness for themselves.