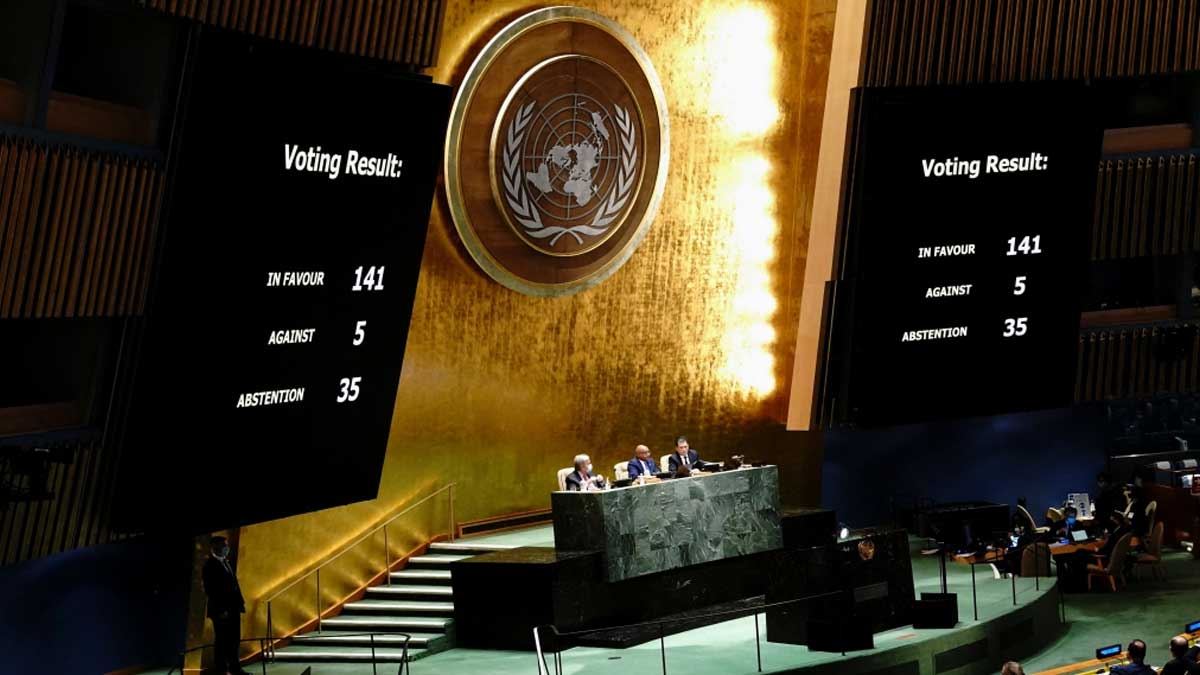 On Wednesday, March 2 2021, the UN General Assembly (UNGA) voted on a resolution demanding an unconditional stoppage to the Russian invasion of Ukraine.

The United States General Assembly unanimously adopted a resolution that “demands” Russia “immediately” withdraw from Ukraine, in a strong condemnation to Moscow’s attack by the great majority of the world’s nations. Pakistan and China, along with 35 other countries ‘abstained’ from voting on the UNGA resolution.

Following a two-day exceptional debate in which the Ukrainian ambassador accused Russia of genocide, 141 of the 193 UN member states voted in favour of the non-binding resolution.

At the UNGA, India, China, Iran, Pakistan, the United Arab Emirates, and 29 other countries abstained from voting against Russian invasion. The resolution had 141 votes in favour, 5 votes against, and 35 abstentions.

This development is all the more intriguing given that top diplomats from various European embassies in Islamabad have asked Pakistan to denounce Russia’s armed aggression against Ukraine in the UNGA resolution.

Pakistan highlighted the need for a diplomatic solution to the ongoing conflict between Russia and Ukraine, Ambassador Munir Akram said the UN General Assembly’s emergency special session, expecting that the discussions launched between the two nations in Belarus would bring an end to conflicts. Pakistan is extremely concerned about the current developments.

Ambassador Munir Akram told the United Nations General Assembly’s emergency session, which began on February 28, that “diplomacy has failed.” Following the 15-member Security Council’s inability to pass a resolution condemning Russian invasion in Ukraine, the 193-member Assembly met less than 24 hours after being ordered to do so by a vote in the Security Council.

Ambassador Akram said Prime Minister Imran Khan grieved the new situation between Russia and Ukraine and expected that negotiation might prevent armed war in his remarks at the special session.

“Since then, we have consistently emphasized the importance of de-escalation, fresh negotiations, prolonged dialogue, and ongoing diplomacy,” the Pakistani ambassador said. “Every effort must be made to prevent further escalation of violence and loss of life, as well as military, political, and economic tensions, which might constitute an unparalleled threat to world peace and security, as well as global economic stability.” “As Prime Minister Imran Khan has repeatedly stated, poor countries are the greatest hurt economically by violence anywhere,” he remarked.

Akram also expressed concern for the safety and well-being of Pakistani citizens and students in Ukraine, stating that the large proportion of them had been relocated and that those who remained would be leaving shortly. “We welcome the Ukrainian authorities’ cooperation, as well as the governments of Poland, Romania, and Hungary in this regard,” the Pakistani envoy stated.