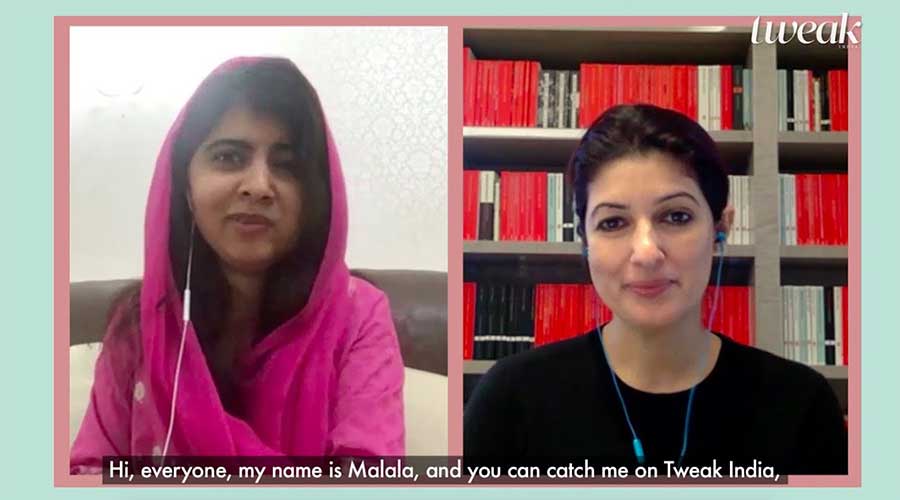 Indian actor-turned-author, Twinkle Khanna sat down for a heartfelt conversation with Malala Yousafzai, a Pakistani activist for female education and the youngest Nobel Prize laureate to discuss the importance of using their own voice in order to help others.

“I was not a television celebrity or actor you know,” Malala pointed out humbly. “So even the support and fame I was receiving was quite different. It was Malala, you’re an inspiration to us, we admire you. So for me, it was like thank you so much for your support and thank you for standing up with me. And if they would ask for a picture then yes, of course, why not?”

Twinkle Khanna also proceeded to ask Malala what it was like to be at the center of death threats at the age of 14.

“For me, that life was the worst I could imagine,” the activist said, talking about how not being educated meant being pushed into child marriage, and becoming more vulnerable to domestic violence. “That’s why I started speaking for my rights to go to school and for the rights of all the girls in Swat valley.”

“For an 11-year-old girl to come to this realisation that I need to speak for everyone, not just me, is a quantum leap,” Mrs Funny Bones declared, breaking down into tears as Malala revisited the painful details of when she was shot, as narrated by her friends.

“I do not remember it, and it’s good that I do not remember,” she points out, adding that after the global support, her research concluded that “if we educate all girls and give them 12 years of education, it adds 30 trillion dollars to the global economy.”

However, Malala often seems to be promoting education and helping others in one way or another. She was recently seen on a video conversation with Sussex Duke and Duchess to discuss and promote education among everyone.