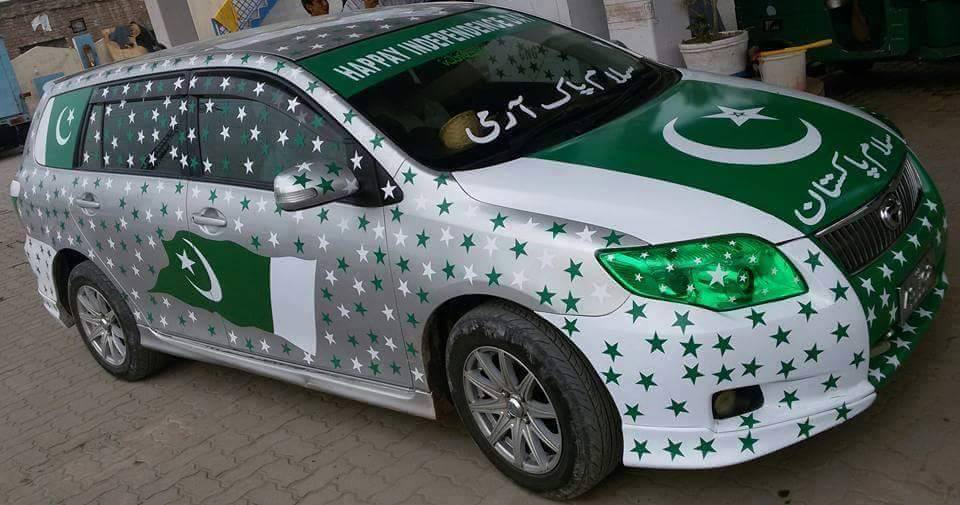 As the Independence Day approaches, preparations have gained momentum in Pakistan as huge gatherings are observed on the roads mostly the young generation who are seen at stalls and rushing for car decoration.

The sale of Independence related items such as badges, flags, stickers, decors and face painting increases every year but witnessing this enthusiasm in the midst of a waning pandemic is nonetheless surprising and is a clear sign that nation awaits dearly to celebrate the Azadi day.

To show the spirit of patriotism and excitement, a large number of citizens particularly children and youngsters are seen on the roadside in order to buy national badges, Pakistani flags and stickers to decorate their cycles, bikes and cars. The young generation of Pakistan spends money on revamping the shape of their vehicles every year.

Buildings, vehicles, shops, societies everything will be decorated with a green and white color combination. For attraction purpose, every individual wants to impress others on the special day of Independence and car decoration is on everyone’s mind.

Everyone participated to décor their homes including Hindus, Sikhs, Christians and all the other minorities in Pakistan who always celebrated the event with the same enthusiasm as others.

Stalls selling patriotic items along the roadsides and in the markets are the center of attraction to buy unique stuff to enjoy the Independence Day.

Read more: Independence Day: Traffic will be stopped for one minute in KP province

Pakistan to mark 73 years of Independence

This year it is Pakistan’s 74th Independence Day which is to be celebrated on Jumma-tul-Mubarak 14th August with traditional enthusiasm, excitement with pure nationalism.

In the capital of Pakistan Islamabad, 31 guns salute will be presented while 21 guns salute in its provinces. Independence Day will start by reciting Quran in the mosques for all the martyrs who lost their lives during the Azadi movement. Apart from that special prayers will be offered for the nation’s prosperity and security and for those who are constantly putting their lives in danger while safeguarding the country by standing on the borders.