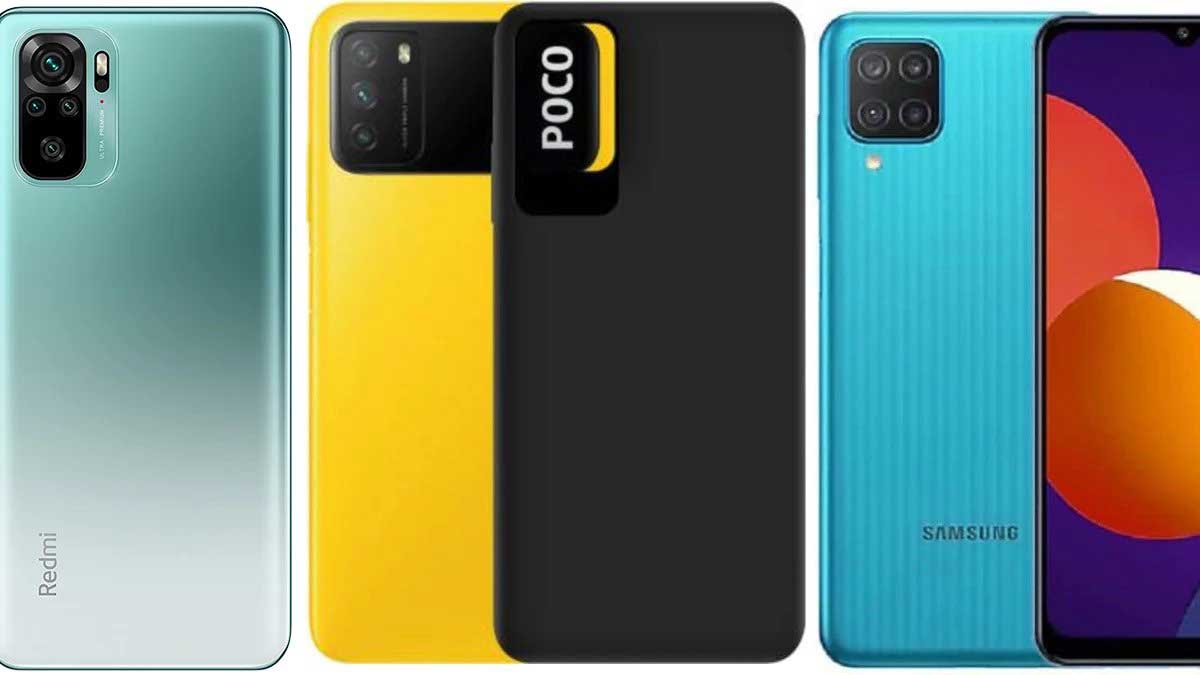 Are you considering purchasing a new smartphone but are concerned about the cost? We’ve compiled a list of the best cellphones available right now, all of which are affordable and feature-packed. All of the smartphones listed below offer excellent hardware available today, as well as good cameras and decent designs, for under Rs. 30,000 in Pakistan.

Purchasing a new phone is usually a good idea; however, selecting the ideal phone is a complex decision that necessitates deep analysis. To make things easier for readers, we’ve compiled a list of the best cellphones under $30,000. We evaluated the power, specifications, design, and, most significantly, the overall value for money of each device.

With its release, Redmi’s note 10 series has wowed the masses. The Redmi Note 10 is the entry-level model, with a price tag of less than PKR 30,000. The Redmi Note series is known for offering a good display and strong performance at a low price point. The Redmi Note 10 took the same path. A Super AMOLED display with a 6.43-inch screen is included with the phone. Corning Gorilla Glass 3 is included for added protection. The phone comes in two sizes when it comes to memory. The first version has 4 GB of RAM and 128 GB of internal storage (under 30,000), while the other has 6 GB of RAM and 128 GB of internal storage (above 30,000).

In addition, the smartphone comes with a new Qualcomm Snapdragon 678 (11 nm) CPU, which is quite outstanding for smartphones in this price category. Moving on to the camera, the Redmi Note 10 has a quad-camera setup with a resolution of 48 MP+8 MP+2 MP+2 MP. The 13-megapixel front camera is also rather good. Beautification is switched on by default, however you can turn it off if you want better picture quality. The strong 5000 mAh battery ensures that users have a long-lasting experience.

However, when compared to the flagship AMOLED screen, the Super AMOLED display falls short.

Infinix has released fantastic phone in the Note series. The Infinix Note 10 is one of the greatest smartphones available for under Rs. 30,000. The phone has an IPS display with a 1080p resolution. It’s a large phone, featuring a 6.95-inch display. Corning Gorilla glass protection is included for further safety. Furthermore, the phone comes in three distinct memory configurations (4 GB + 64 GB, 4 GB + 128 GB, and 6 GB + 128 GB). The phone comes with a Media Tek Helio G85 (12 nm) chipset for performance. The phone has a 48 MP + 2 MP + 2 MP triple-camera on the back, as well as a 16 MP selfie camera on the front.

A fingerprint scanner is installed on the side for added security. You also receive a 5000 mAh battery, which provides adequate battery life.

Ultimately, it’s a good phone, both in terms of performance and specifications. You might be asking why it didn’t take the number one spot on our list. The G85 CPU is fantastic for gaming, but it can’t compete with the Redmi Note 10 in terms of performance. Furthermore, the Redmi Note 10 offers a better camera result and, most importantly, a stunning design that delivers a fantastic feeling in the palm.

For a long period, the Infinix Note series has entertained consumers. Their reputation is built on providing high-end features at a reasonable price. The Infinix Note 8 has been released by the company. The device has a 6.95-inch display with a resolution of 720 x 1640 pixels. Corning Gorilla glass also provides protection. Furthermore, the phone comes with a strong Helio G80 processor that is suitable for gaming. It contains 64 GB of RAM and 128 GB of internal capacity in terms of memory. There’s a quad-camera setup on the back, with a 48-megapixel primary camera and quad-LED flash.

There is a dual selfie camera with a resolution of 16 MP + 2 MP for selfie enthusiasts. There’s also a fingerprint scanner on the side, as well as a robust 5200 mAh battery.

In the recent age, the Chinese tech giant Xiaomi has been launching some high-tech smartphones at a cheap price. The Redmi 9T is one such smartphone. The screen is 6.53 inches in size and has a 1080p resolution. The phone’s chipset is the snapdragon 662, which is a strong processor. There’s also a quad-camera setup on the back with a 48 MP primary camera. The RAM is 4 GB, while the internal memory is 64 GB. There is only one selfie camera with an 8 MP resolution. There’s a fingerprint scanner on the side, as well as a 6000mAh battery. The phone comes in four different colours: Carbon Gray, Twilight Blue, Sunrise Orange, and Ocean Green.

The POCO M3 was also launched. The display is an IPS panel with a 6.53-inch screen and a resolution of 1080×2340 pixels. Corning Gorilla Glass 3 provides additional protection. The phone’s chipset is the snapdragon 662 (11 nm), which is a strong processor. There’s also a triple-camera arrangement on the back, with a 48 MP main camera. There is only one selfie camera with an 8 MP resolution. The RAM is 4 GB, while the internal memory is 64 GB. There’s a fingerprint scanner on the side, as well as a 6000mAh battery. Reverse charging is also possible with this phone.

Tecno has grown in prominence as a result of its ability to deliver high-quality products at a reasonable price. Similarly, they did not disappoint this time. The Camon 16 SE was recently released by the company. A 6.8-inch dot-in display with a resolution of 720 x 1640 pixels is included with the phone. In addition, the phone comes with a strong Helio G70 processor, which is reasonable for this price range. It contains 6 GB of RAM and 128 GB of internal capacity in terms of memory. There’s a quad-camera setup on the back, with a 48-megapixel primary camera and a Penta-LED flash. A selfie camera with a resolution of 16 MP and a dual-LED flash is available for selfie enthusiasts. There’s also a fingerprint scanner on the back, as well as a robust 5000 mAh battery.

The Oppo A31 has a 6.50-inch drop notch display with a resolution of 720×1600 pixels and a 20:9 aspect ratio. A 2.3GHz octa-core MediaTek Helio P35 CPU powers the Oppo A31. It has 4GB of RAM and 64 gigabytes of internal storage. The Oppo A31 runs on Android 9 and is powered by a non-removable 4230mAh battery. The phone also sports a triple rear camera, with the main lens being 12-megapixels. Corning Gorilla Glass 3 provides protection. The Oppo A31 can be purchased for PKR 29,999/-.

The operating system isn’t the most updated, there’s a less powerful chipset, battery, and camera, and the display isn’t particularly spectacular. Unexpectedly, the price of this phone is more than that of many others on our list.

This is one of the first smartphones from Samsung to include some higher-end features at a low price. There’s a quad camera installation with a 48 MP main camera.  Furthermore, the Exynos 850 chipset is installed, which is a very strong chipset (8nm). A 6.5-inch display with a resolution of 720 x 1600 pixels is included. The display panel, on the other hand, is TFT, which is somewhat disappointing. The price of the A21s is PKR 29,999/-.

This is a phone to all brand-conscious individuals. The reason for this is that the A21s is a Samsung phone that is branded, stylish, powerful, and affordable.

Samsung has a brand name at the top of which it has established a pricing structure. Samsung has unveiled the new A12 for around 30,000, but its specifications are unimpressive when compared to those of rival smartphones. A 6.5-inch IPS panel with a resolution of 720 x 1600 pixels is included with the phone. Furthermore, the phone comes with a poor Helio P35 chipset that falls short of expectations. In terms of memory, the under 30,000 model features 3 GB RAM and 32 GB of internal storage.

A quad rear camera with a 48 MP main camera and an LED flash is included. A selfie camera with an LED light and an 8 MP resolution is available for selfie enthusiasts. There’s also a fingerprint scanner on the side, as well as a robust 5000 mAh battery. The smartphone comes in four colours: black, white, blue, and red.

All of the smartphones listed above are up to par and offer a wealth of features, making them the Best Smartphones under Rs 30,000.

If you have any newer devices that are less than RS 30,000, please share them. Also, let us know which product from our list you believe should be purchased.