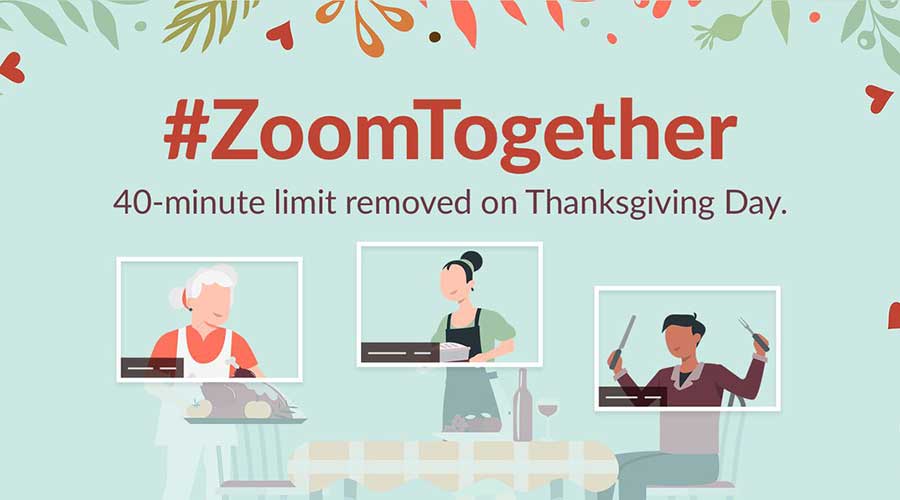 As a Thanksgiving treat Zoom will be dropping the 40-minute time limit for free users and allow unlimited meeting time for everyone on November 27.

Zoom has a special announcement for Thanksgiving as the video calling service is planning to lift its 40 minutes video calling limit on free meetings and allowing it’s all users to talk as long as they want. A perfect way to connect everyone on the special day.

As per the company, the limit will be lifted from November 26 in the morning and will last until the night of November 27. The notification is a global announcement which means that Pakistani users will also get benefit from this offer as much as the others.

While sharing the favor with their followers the company announced the news on Twitter.

As a thank you to our customers, we will be lifting the 40-minute limit for all meetings globally from midnight ET on Nov. 26 through 6 a.m. ET on Nov. 27 so your family gatherings don't get cut short. ❤️? #ZoomTogether pic.twitter.com/aubsH0tfxG

Zoom will end the Thanksgiving promotion at 6 am on November 27th.

Throughout the coronavirus pandemic, Zoom’s 40-minute limit on free meetings had been in place. Apart from Zoom, other video calling services such as Google Meet also have similar limits. Google’s video calling feature lets you have a video chat for up to 60 minutes before your session ends. However, you can start a new meeting after the session ends on both platforms.

Eric Yuan the founder of Zoom launched the video calling feature in January 2013. Before COVID-19, Zoom was unable to capture a large market but the moment pandemic hit the world Zoom struck gold and it was due to video conferencing application users across the globe stayed in touch during the lockdown and leaving behind its competitors such as Google Meet, Microsoft Teams and many others.

Zoom usage shot up in March 2020. The blog posted by Yuan revealed that the online video calling feature was detecting 200 million daily meeting participants. In April, the figure had risen to 300 million.

According to data, India is the biggest market for Zoom in Q2 2020 by installs, as the company reported 68 million Zoom downloads, followed by the United States with 41 million.