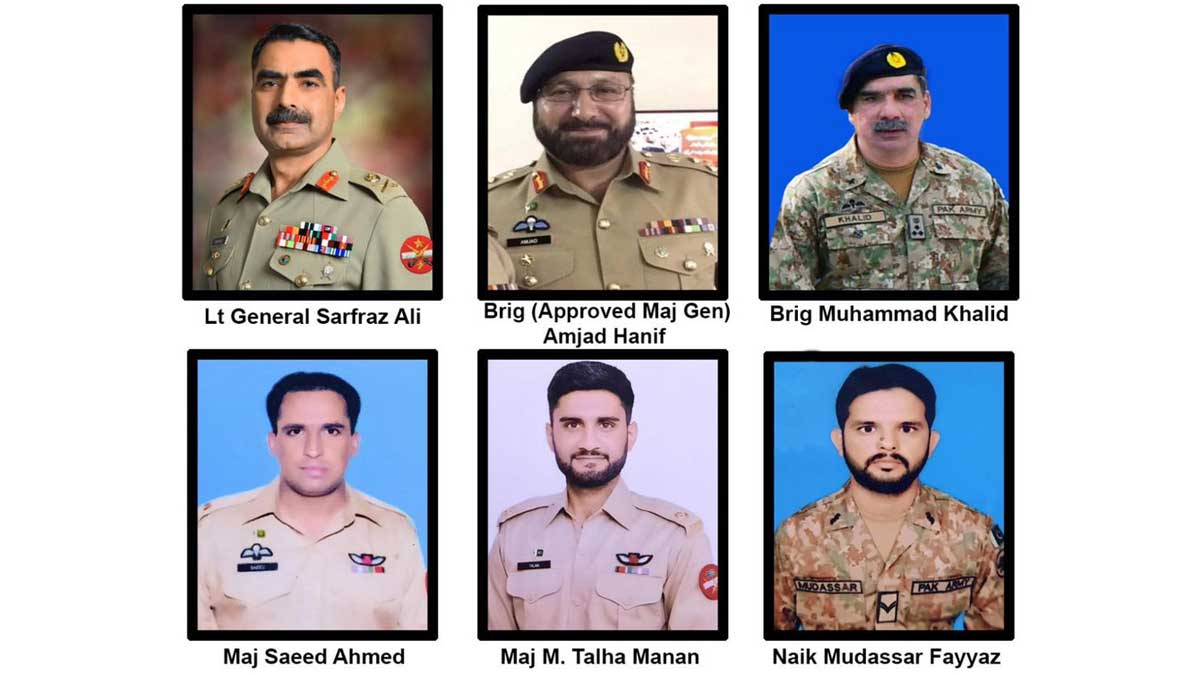 A senior police officer confirmed today that the wreckage of a missing Pakistan Army Aviation helicopter, which was engaged in a flood relief mission in Balochistan, has been discovered close to the Sakran district of Khuzdar.

According to the deputy inspector general Khuzdar Pervez Imrani, the military helicopter’s wreckage was discovered about 8 kilometres from the Abbas Police Post, close to the Sassi Punnu shrine.

Helicopter debris was discovered by the Lasbela police on the peak of a mountain in Haji Moosa Goth, he claimed.

The Army Aviation helicopter went missing a day earlier, and on Tuesday, Army Chief General Qamar Javed Bajwa called Prime Minister Shehbaz Sharif to update him on the latest developments in the rescue operation in Balochistan.

The prime minister praised Lieutenant General Sarfraz Ali as a superb soldier and a good person.

He voiced concern for everyone on board’s safety.

In addition, the prime minister requested that everyone remember the courageous Pakistani soldiers in their prayers and expressed how extremely devastated the entire nation was by the unfortunate incident.

The premier praised the “dutiful sons” who assisted flood victims as “wonderful examples of service.”

Since last night, the army chief has been updating the prime minister on the progress of the search for the missing helicopter.

The Inter-Services Public Relations (ISPR) tweeted on Monday that a Pakistan Army aviation chopper carrying prominent individuals and travelling from Quetta to Karachi had disappeared.

The military’s press office stated that the aviation helicopter had lost communication with air traffic control while performing a flood relief operation in Lasbela, Balochistan (ATC).

The tweet stated that there were six people on board, including Commander 12 Corps who was overseeing flood relief efforts in Baluchistan and that a search operation is in progress.

According to the information, Major Talha was the co-pilot of the helicopter while Major Syed was the pilot. Brigadier Amjad, Director-General of the Coast Guards, Brigadier Khalid, and chief naik Mudassir were also present.

The severe rains that have devastated the province and killed 147 people are currently keeping the civil administration and the Pakistan Army busy with relief efforts.

After the event, the district administration reported that a helicopter had crashed near the Windar area’s Sassi Punnu Shrine, although the ISPR has not yet confirmed whether it was the same helicopter.

The helicopter is being searched after, according to local police teams. Deputy inspector general Khuzdar Pervez Imrani stated that there are mountain ranges in the vicinity, which is making the search effort challenging.

He added that police teams are attempting to search the helicopter on motorcycles despite the difficulties brought on by the terrain. For the past five hours, police and the Frontier Corps have been working together to find survivors if any.