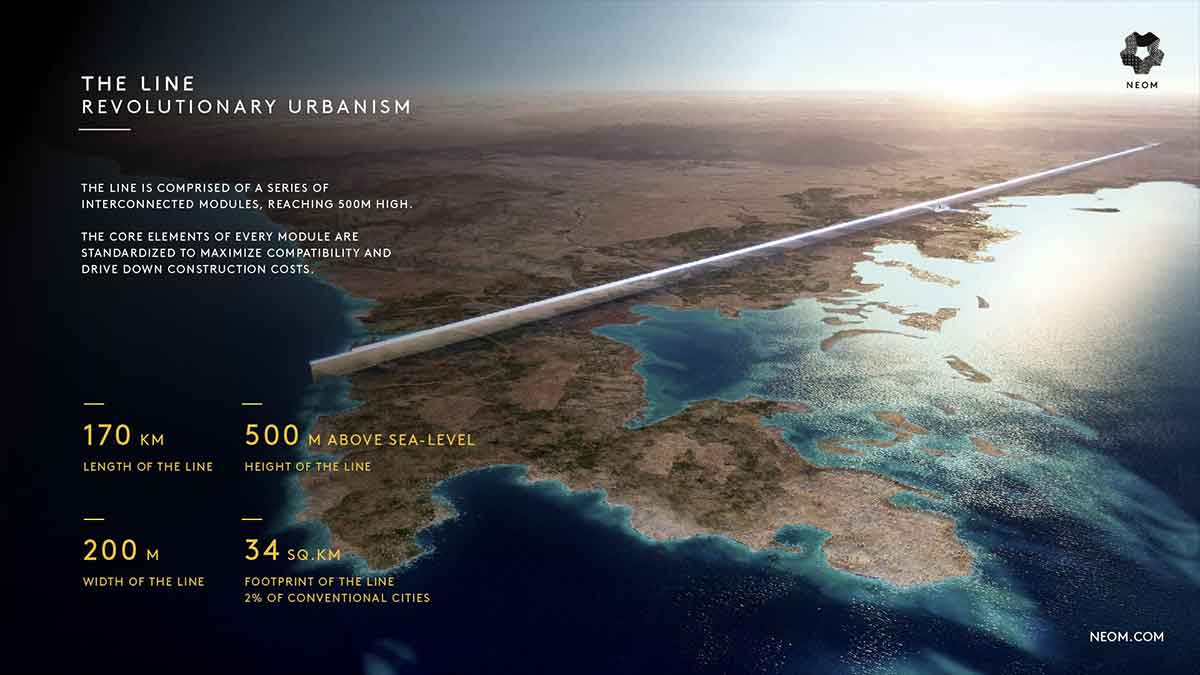 According to the Crown Prince of the Kingdom, the planned zero-carbon city of Neom being created in Saudi Arabia will include vertical levels of structures for business, housing, and leisure stretching for 170 kilometres across a futuristic environment.

Prince Mohammed bin Salman unveiled The Line, the centrepiece of the $500 billion project, and said that it would have its own independent judicial system and be partially supported by a public listing on the country’s stock exchange in two years.

The flotation, he claimed, “would raise the value of the Saudi stock market by a trillion riyals ($266 billion). At least 1.2 trillion initially, and after the project is finished, the total cost will rise to over 5 trillion.

The ultimate objective was to transform the seventh-ranked Saudi stock market into “one of the largest stock markets in the world,” according to international rankings.

According to Prince Mohammed, all endeavours in which the sovereign wealth fund of the Kingdom has invested in the future would be listed on the stock exchange. In 2027, the government hopes to raise 500 billion riyals in capital, and Neom may need to obtain an additional 300 billion riyals from the market.

The Crown Prince estimated that the first phase of construction, which includes a sizable business zone, will cost 1.2 trillion riyals ($319.39 billion), with half of the money coming from the kingdom’s sovereign wealth fund.

At a Jeddah event unveiling The Line, Prince Mohammed told journalists that the new city will fundamentally alter how people live in the future. There will be “100% renewable energy” in a “environment free from highways, cars, and pollutants.”

The Red Sea development, which spans 26,500 square kilometres, is what the Crown Prince described as a “cosmopolitan centre” where more than nine million people will live in a new way.

Read more: Pakistanis to make the most of the workforce for Saudi’s futuristic NEOM city

“The Line is a confirmation of our continuous dedication to bringing a product to a global audience. Neom is a place where people who hope for a better tomorrow can live, according to Prince Mohammed.

Neom is in the forefront of delivering innovative solutions to address these problems. “We cannot ignore the liveability and environmental challenges facing our world’s cities. The vertically tiered neighbourhoods in the city will present a challenge to the usual flat and horizontal cities. The Line’s designs represent how metropolitan settlements would look in a world without traffic, automobiles, and pollutants.

The Line is envisioned as a series of “modules” for various urban uses, each 200 metres wide, positioned between two mirrored outside facades rising to a height of 500 metres, forming a 170-kilometre line across Neom’s map. Plans include for hanging walkways, sections for swimming, parks, and even a stadium that is 330 metres above the ground.

By 2060, Saudi Arabia, the largest supplier of crude oil globally, wants to have no carbon emissions at all. The lack of a need for a car for transportation, according to Prince Mohammed, was one benefit of living in Neom. He wanted to emphasize, “If you have money, you should lift the bar, be adventurous, be innovative, be different.” Why should we model our city like typical ones when we are starting from scratch? I firmly believe it will be the most livable place on the earth.

Along with radical design and environmental reform, Neom will also have its own independent legal system, free from Saudi Arabia’s judicial system, with investors playing a crucial part in its creation.

The Crown Prince stated that this project was well under way and that some specifics would be revealed the following year.

It will be discussed with neighbouring nations to try to prevent developments on the other side of the border from upsetting the fundamental aesthetics that Neom is attempting to achieve.

The project’s largest donor is the Public Investment Fund of Saudi Arabia, a sovereign wealth fund. The Crown Prince, however, stated that he anticipated Saudi businesspeople would also want to contribute to one of the most fascinating architectural projects now underway in the world.

Despite claims of delays in the project in the foreign media, Prince Mohammed insisted that the first phase of the project is scheduled to conclude by 2030 with, “1.5 million people, and there will be nine million residents by 2045.”

An important Saudi official who attended the ceremony indicated he recognized some of the foreign doubts regarding the project’s huge scale. But he said, “This country was founded on the sand; constructing for the future is part of that tradition; you only discover how far you can go by moving forward.”

Since Joe Biden’s recent trip to the Kingdom, the Crown Prince has made more appearances on the global stage. According to reports, the US President asked Saudi Arabia to raise oil output to reduce the country’s rising energy costs. It is claimed that he did not obtain any promises, but American officials anticipate an increase in the future following the lines established by OPEC.