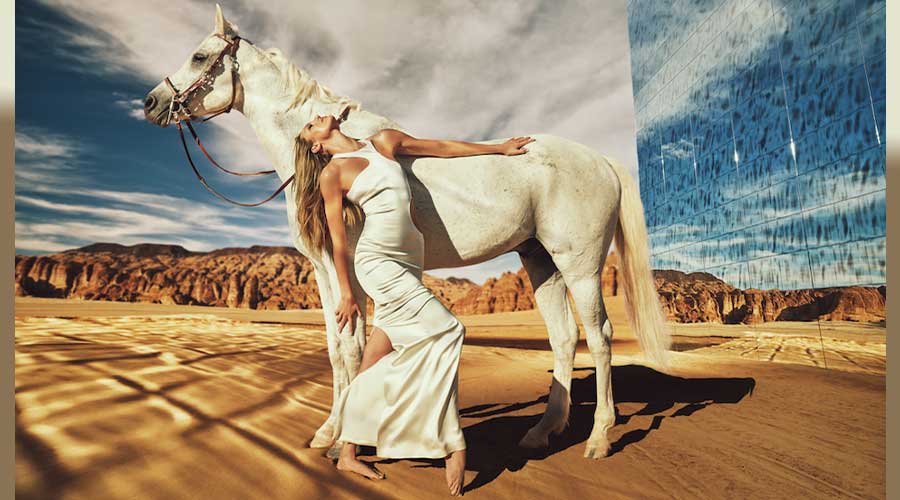 A controversial photoshoot of International models was held in the province of Medina. The photoshoot campaign was named 24 hours in Al Ula in which supermodels were seen wearing tight dresses and thigh slits.

The approval for an inappropriate photoshoot in the holy city of Medina sparked dispute, as the photoshoot was against Islamic principles.

The Models were seen posing on the UNESCO World Heritage site. The site is located around 300 km away from Medina but it lies in the same province. The site is the world’s largest open-air museum, which consists of carved rocks that are quite similar to Jordan’s Petra.

Al Ula is 300km away from Medina city and the government is planning to improve its tourism industry by promoting its famous spots. Al Ula was built by Nabataeans some 2,000 years ago and it surrounds over 100 monumental tombs.

Majority of the Muslims believes that the photoshoot and models wearing dresses are considered as immodest and raised questions why Saudi officials allowed such kind of photoshoot.

The shoot could be a step towards reforms and liberalism in the Kingdom. The Saudi regime carried out this to open its economy to international tourism and modernization.

Saudi Arabia is making a lot of changes under the young leadership of Muhammad bin Salman who is the crown Prince of Saudi Arabia.

In the near future kingdom is planning to reduce the authority of religious police. Controlling of gender mixing will also be lifted and the most important is mandatory wearing abaya or loose gown will be eliminated.

The recent photoshoot for models in Medina was conducted by Vogue Arabia, which is the Arab edition of the US-based fashion magazine. In the photoshoot, Kate Moss, Candice Swanepoel, Jourdan Dunn, Amber Valletta, Alek Wek, Xiao Wen, and Mariacarla Boscono were featured.