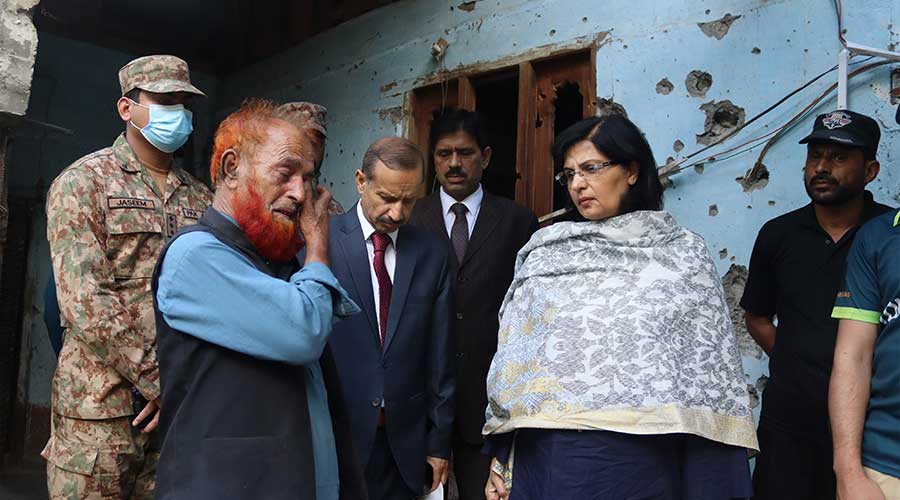 Special Assistant to Prime Minister on Social Protection and Poverty Alleviation Dr. Sania Nishtar visited Jura sector near the Line of Control in Neelum Valley, Azad Kashmir and gone through the arrangement for Ehsaas Cash disbursal to all families living in those villages.

According to the issued press release, she managed to allocate digital disbursement of Rs 12,000 Ehsaas Cash handouts to vulnerable families living along the LoC in Azad Jammu and Kashmir (AJK). Also, she met those women who came to the Jura Bazar site to collect cash grants.

In June 2020, Prime Minister Imran Khan announced Ehsaas Cash package for around 138,275 families of 219 villages living along the LoC.
The government is now distributing some Rs 3 billion among all families residing in 219 villages across the LoC under the Ehsaas programme.

“All families in 219 villages across LoC in AJK are under the persistent risk of unprovoked attacks and have sacrificed their lives, livestock, and properties. All families in these villages have been included in the Ehsaas Programme,” said Dr Sania in Neelum Valley.

The monthly stipend of Rs 2000 will also be distributed to each family along with an emergency cash payment of Rs 12000 to be given to the women of these households.

Moreover, the Pakistan Army and district administration Neelum Valley steps were highly appreciated by the SAPM that were taken to assist Ehsaas in the process of updating lists of households and made sure that none of the households residing in 219 villages along the LoC gets deprived of Ehsaas Cash in line with cabinet’s decision.

Doctor Sania Nishtar met with the victimized families also in Jura Bazar, such families had been suffering severe damages to their properties as a result of meaningless attacks by Indian troops.