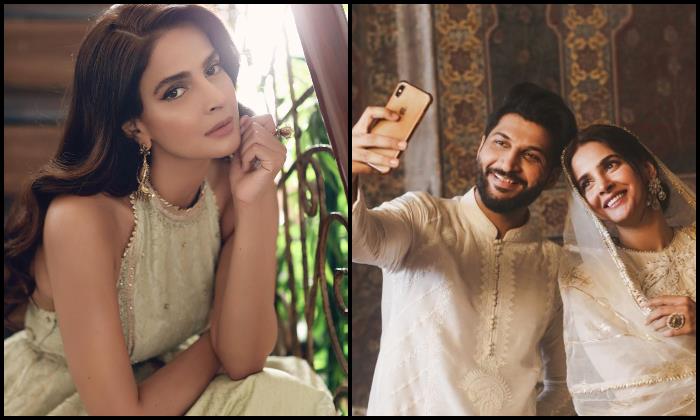 A video emerged of TV actress Saba Qamar and singer Bilal Saeed apparently dancing in a mosque which angered the public. #SabaQamar was a top trend on Twitter on Saturday after their dancing snippet in Wazir Khan Mosque situated in the inner city of Lahore went viral.

Social media awaits the opportunity to get a controversial topic and this time it came in the shape of Bilal Saeed’s latest song Qubool the shoot of which took place in Wazir Khan Mosque.

The minute it was shared online social media responds with anger.
Moreover, renowned TV actress also made a TikTok video of her with singer Bilal Saeed where she was allegedly dancing.

People of Pakistan started questioning the Mosque management why they allowed songs video shooting inside Mosque.

Saba Qamar after facing immense criticism shared first teaser of the song on her Instagram account with a clarification on the hot issue.

“Presenting the first teaser of ‘Qubool.’ This is also the only sequence that was shot at the historical Wazir Khan Mosque. It’s a prologue to the music video featuring a Nikkah scene,” said Saba Qamar on her Instagram post.

She also says, “It’s a prologue to the music video featuring a Nikah scene. It was neither shot with any sort of playback music nor has it been edited to the music track. I won’t explain any further as the full video comes out on 11th of August.”

Talking about beyond the scene (BTS), the video that was circulating on the social media was just a circular movement to capture for a poster of latest song Qubool. Saba Qamar also expressed that she cannot think about disrespecting a holy place.