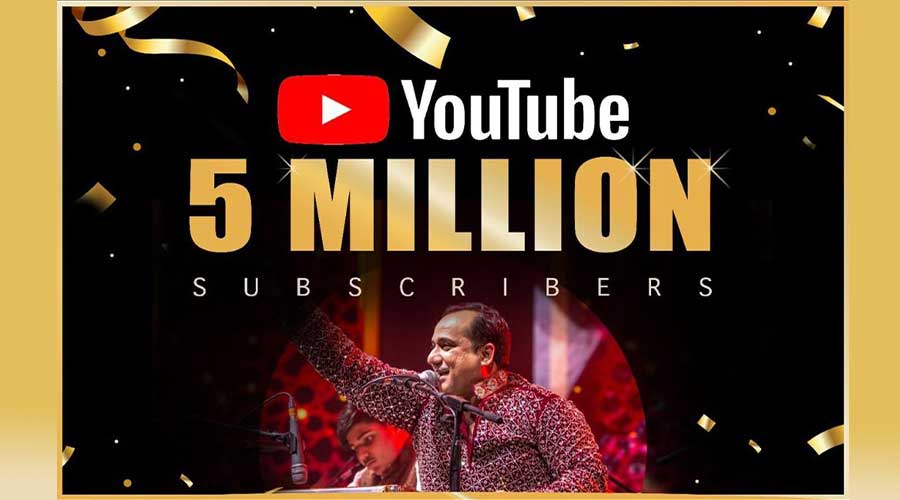 Legendary singer Ustad Rahat Fateh Ali Khan revealed on his Instagram account that he crossed 5 million YouTube subscribers, which makes him the most followed celebrity in the Pakistan entertainment industry.

While celebrating the moment Rahat Fateh Ali Khan posted a video on Instagram, Khan expressed his thankfulness for all the love and support he receives from his admirers.

Rahat took to Instagram to announce the feat while cutting a cake, “5 Million Subscribers – #UstadRahatFatehAliKhan. Thank you to all my fans for making 5 Million subscribers possible. I want to celebrate this moment with you all. Thank you, everyone, for all the love and support.
Stay tuned for the upcoming projects.”

Thank you to all my fans for making 5 Million subscribers possible. I want to celebrate this moment with you all. Thank you, everyone for all the love and support. Stay tuned for the upcoming projects: https://www.youtube.com/channel/UCP3nA0sJTqSxFv43S7sJU1g #UstadRahatFatehAliKhan – #SalmanAhmed – #PMEWorld

Rahat Fateh Ali Khan has not just won the hearts of Pakistani’s but his poignant vocal sound is an inspiration for budding musicians all over the sphere. The singing star is amongst the stars of our nation who constantly gave us entrancing music throughout his career.

After the death of Ustad Nusrat Fateh Ali Khan (NFAK), there was a huge gap formed in the musical industry, but in some way, Ustad Rahat Ali Khan tried to fill the gap.

He has sung more than fifty title tracks of television serials and over one hundred film songs in both Hollywood and Bollywood. ‘Afreen Afreen’, ‘Bol Na Halke Halke’, ‘Main Tenu Samjhawan’, and ‘Dekhte Dekhte’ are just some of his recent versatile hits.

These all are the successful launch and you will observe a wide range of Khan’s voice, all the songs performed flawlessly along with strong song lyrics and the composition approving his voice melodiously.