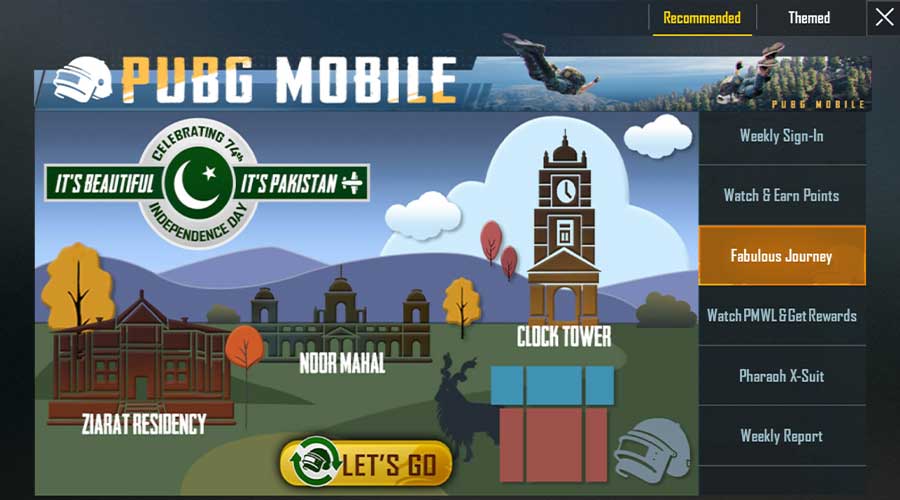 Player Unknown’s Battleground (PUBG) is holding a special event for Pakistani users only. On the Pakistan 74th Independence Day, PUBG will be celebrating Pakistan’s day event as a token of appreciation for the support and affection of local players for the game.

The event follows an interesting and interactive gameplay in which PUBG players have to complete daily missions in order to grab the perks. The more you complete the tasks the more you will earn points and move on to the other phase of the event which includes maps that encompass historical and tourists place such as Noor Mahal, Clock Tower, Derawar Fort, Ziarat Residency, Chitral National Park, Badshahi Mosque, Mazar-e-Quaid and Hingol National Park.

Along with these great sites, there are Royal Pass mission cards available to collect along with costumes, parachute skin bag cover, and many more exciting rewards.

PUBG gifts Pakistan with an Independence Day event after its unban

PUBG was under scrutiny in Pakistan during the last month as Pakistan Telecommunication Authority (PTA) banned the application over time wastage and dangerously addictive gameplay.

However, the people of Pakistan did not endorse the decision taken by PTA and started a movement on Twitter against PTA and asked Prime Minister Imran Khan to unban the popular game. Finally, Islamabad High Court listened to the petitions and directed PTA to unban the game immediately.

Player Unknown’s Battleground famously known as PUBG is an online multiplayer battle royale game that is designed and developed by PUBG Corporation, PUBG is created by a South Korean video game company named as Bluehole.

PUBG Mobile was launched back in March 2017 and according to data revealed by the company, the battle royale game already crossed 600 million downloads and still counting.