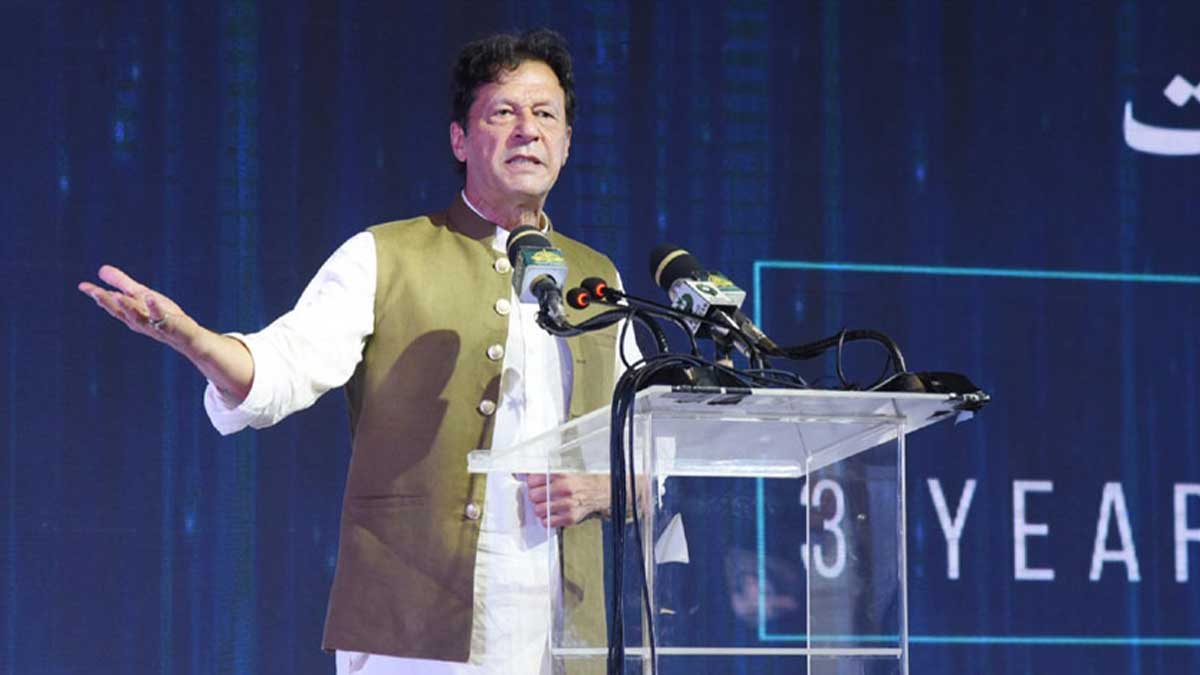 Prime Minister Imran Khan has addressed a nation and gave a review of his PTI party’s three-year performance, said exports and foreign exchange reserves have been increasing despite the Covid pandemic.

On Thursday, Prime Minister Imran Khan being the chairman of Pakistan Tehreek-e-Insaf briefed nation on party’s performance so far at the Jinnah Convention Centre in Islamabad. The PM began the speech by welcoming “all our chief ministers, governors and the leaders of AJK who have just been elected” before commending Sindh Governor Imran Ismail for singing his famous Tabdeeli song prior to his speech.

“I’m not sure if he has more talent for singing or governance,” PM Imran said about the governor’s performance.

He recalled the time when his party was nascent and “had just five to six people who were mocked for being PTI representatives”.

While addressing at a ceremony to unveil his PTI government’s three-year performance, the prime minister said that when his government came to power “the size of current account deficit was of $20 billion and now it is $1.8 billion, foreign currency reserves have increased to $27 billion from $16.4 billion, and tax collection at the end of previous government was Rs 3,800 billion and it is now Rs 4,700 billion, and these figures are real and not of former finance minister Ishaq Dar”.

He said that remittances stood at $19.9 billion when the present government came to power and now these have increased to $29.4 billion, showing more than $10 billion increase, “and the country should be thankful to the overseas Pakistanis for always helping the economy at a difficult time”.

The prime minister mentioned the country’s quarrel with India in the aftermath of Pulwama incident and thanked the armed forces for their part. “I appreciate our army and air force. As they (Indian fighter jets) came into our territory and launched an offensive, we realised the [power] of our army.”

He discussed his government’s handling of the coronavirus pandemic, recalling how he resisted the pressure to impose a “blanket lockdown and by the grace of Allah we were protected”.

“The WEF (World Economic Forum) praised Pakistan for its handling of Covid-19, and the Economist [acknowledged] Pakistan for being one of three countries that effectively tackled the coronavirus,” he said.

“We witnessed record sales in motorcycles and tractors, while car sales saw an 85 percent increase. It means that the people’s lifestyle is improving.”

“In our tenure, Punjab’s anti-corruption has recovered Rs 450 billion so far,” he claimed. “NAB (National Accountability Bureau), in its 18 years before we came to power, had recovered Rs 290 billion and in last three years they recovered Rs 519 billion. All hue and cry is because of this reason.”