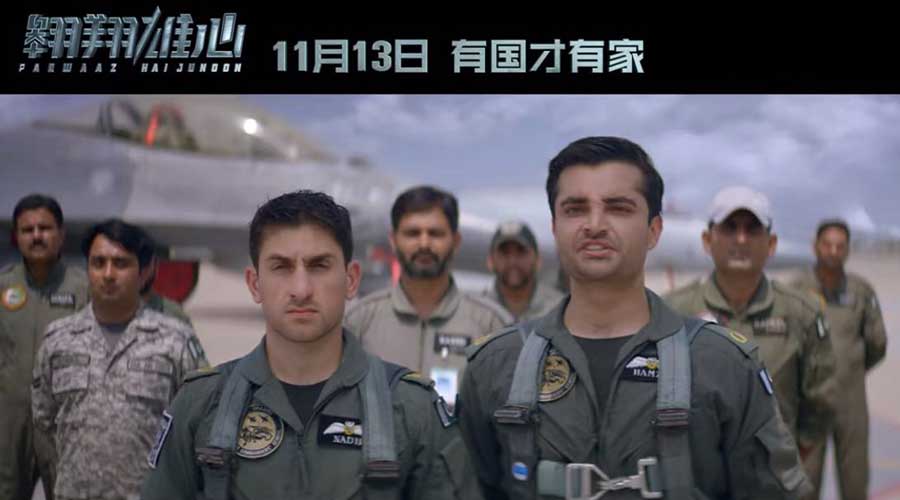 Parwaaz Hai Junoon, a tribute to the Pakistan Air Force and its fighter pilots who risk their lives for the protection of their citizens every day on duty is all set to release in China.

The release of Parwaaz Hai Junoon will commemorate the upcoming 70th anniversary of diplomatic ties btw Pakistan and China making it the first Pakistani film to release in Chinese mainland theaters in 45 years.

The Haseeb Hassan 2018 directorial venture is of a risk-laden path chosen by fighter pilots, young and old. This movie gained high popularity, this action war romantic movie is now all set for release in China – ahead of the 70th anniversary of the establishment of diplomatic relations between the two countries.

“Grateful to Allah that I got to be a part of the first Pakistani film to be released in China after 40 years,” the Alif actor Hamza Ali Abbasi revealed in excitement on Twitter also sharing a new trailer of the flick.

This movie is going to be the first flick to be released commercially in cinemas across mainland China. As per a statement by the Chinese embassy, the Ahad Raza Mir, Hamza Ali Abbasi, and Hania Amir starrer is being imported to China as one of the 16 local-to-local partnerships under the Sino-Pak local cooperation, an initiative to strengthen the foundation of friendship between both countries.

Moreover, The Parwaaz Hai Junoon Instagram page made things official with a post that read, “In an historic development for Pakistani films, Parwaaz Hai Junoon starring Hamza Ali Abbasi, Hania Amir and Ahad Raza Mir in lead roles is all set to release in China on November 13.

Produced under the banner of Momina & Duraid Films, PHJ has become the first Pakistani film in over three decades to be commercially released across Chinese mainland.”

However, according to the Global Times, bringing the movie to the mainland agreement was signed in April 2019 at a China-Pakistan economic and trade cooperation forum, during the second Belt and Road Forum for International Cooperation.