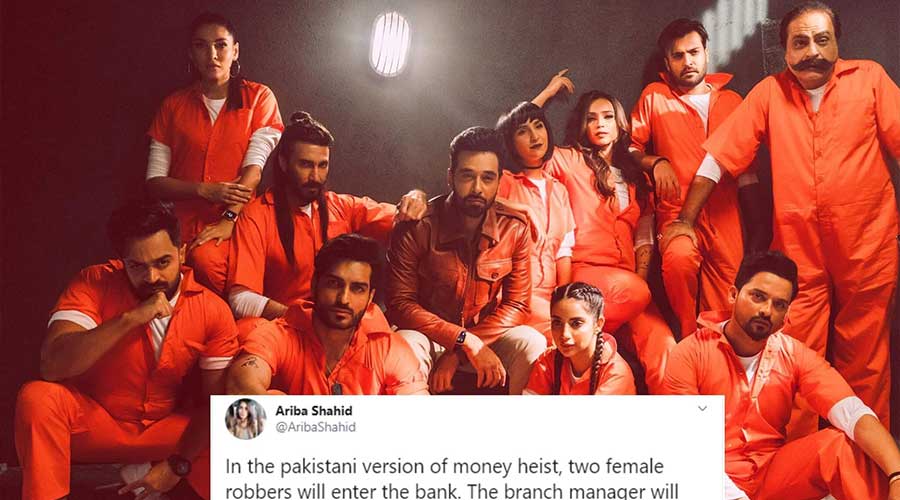 Over the last weekend, a few pictures featuring some prominent faces from the Pakistan entertainment industry went viral on social media. What caught the attention of many users were the names and the attires of the actors posing for mugshots. The looks of actors had an uncanny resemblance with the Spanish hit Netflix crime drama La Casa De Papel, popularly known as Money Heist and just like the original TV show the actors who had been given names after different cities (of Pakistan in this case, such as Dadu, Bela, Sheikhupura, and others).

Twitter users had a blast and cracked jokes about Pakistan remaking Money Heist, leading some to believe that an actual Pakistani version of popular Netflix TV show La Casa de Papel (The House of Paper) aka Money Heist was in the making.

Then Pakistani actor Aijaz Aslam announced the launch of his film ’50 Crore’ on Twitter. Aslam shared a teaser and did not divulge too many details but instead tweeted ‘coming soon’.

And afterwards Twitter was on fire and people were making fun of this new production “50 Crore” and the whole Twitter started trending “#MoneyHeist and #50Crore”.

Another one tweeted, “how did the cast of 50 CrOre even agreed do it…. they are gonna embrass themselves…”

how did the cast of 50 CrOre even agreed do it…. they are gonna embrass themselves…