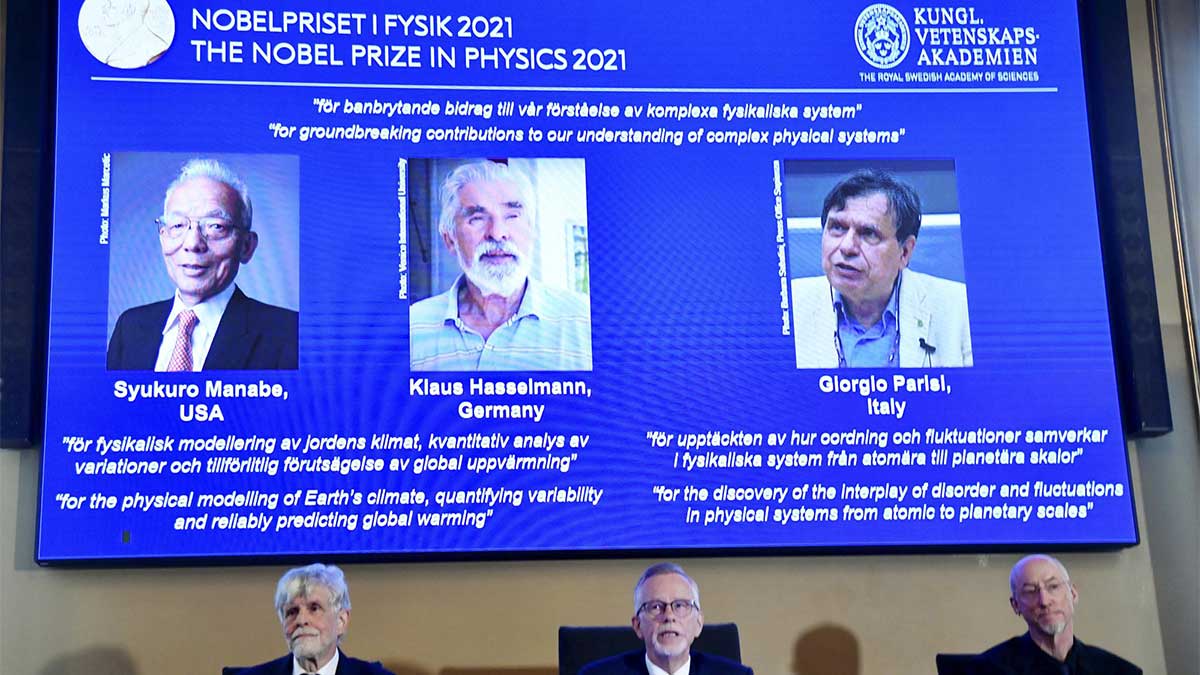 Scientists working on models to anticipate global warming and the interplay of planetary systems received the Nobel Prize in Physics in 2021.

Syukuro Manabe and Klaus Hasselmann will share half of the prize for their work in “physical modelling of Earth’s climate, quantifying variability, and reliably predicting global warming.”

Giorgio Parisi received the other half of the prize for his “finding of the interplay of disorder and fluctuations in physical systems from atomic to planetary scales.”

Read more: Nobel Prize ceremonies to be curtailed again due to pandemic

This is one of science’s most distinguished awards, and it has previously recognized breakthroughs in fundamental forces of nature and cosmic occurrences.

The Royal Swedish Academy of Sciences introduced the latest laureate from its beautiful Session Hall in Stockholm.

Nobel Prize in Physics, which includes £841,000 ($1.14 million) and a gold medal, is frequently shared by multiple scientists working in similar subjects.

What Did They Discover?

Syukuro Manabe shown how rising carbon dioxide levels in the atmosphere led to rising surface temperatures. He led the creation of physical models of the Earth’s climate in the 1960s. His contributions paved the way for the development of climate models.

Klaus Hasselmann created a model that links weather and climate, answering the question of how climate models can be trusted despite the fact that weather is unpredictable.

His methods have been used to demonstrate that the increased temperature in the atmosphere is caused by human carbon dioxide emissions.

His contributions to the theory of complex systems are among the most significant.

They allow us to comprehend and characterize a wide range of materials and occurrences that appear to be completely random.

Not just in physics, but also in fields as diverse as mathematics, biology, neuroscience, and machine learning.

The three scientists were given the honour because their studies had a common theme of ‘chaotic and apparently random phenomena,’ according to the committee.

The 2021 Nobel Prize For Physics Laureates

Professor Manabe is a Senior Meteorologist at Princeton University in the United States, and he was one of the first to use computers to simulate global climate change and natural temperature changes.

Manabe was born in Shingu, Japan, in 1931, and graduated from the University of Tokyo with a PhD in 1957.

He was the first to investigate the interaction between radiation balance and vertical air mass transport in the 1960s, and he led the development of physical models of the Earth’s climate.

His work set the groundwork for the current generation of climate models.

Professor Klaus Hasselmann is an oceanographer and climate modeller who works at the Max Planck Institute for Meteorology in Hamburg, Germany.

He created the Hasselmann climatic variability model, which can be used to anticipate climate change over time.

Hasselmann was born in Hamburg, Germany, in 1931, and received his doctorate from the University of Göttingen in 1957.

His methods have been used to demonstrate that the increased temperature in the atmosphere is caused by human carbon dioxide emissions.

Professor Parisi is a theoretical physicist at Sapienza University of Rome in Italy, where he specializes in quantum field theory, statistical mechanics, and complex systems.

Parisi was born in 1948 in Rome, Italy, and received his PhD from Rome’s Sapienza University in 1970.

Equations that describe dynamic scaling of growing interfaces and the observation of whirling flocks of birds are two of his most well-known scientific contributions.

The findings are among the most significant contributions to complex systems theory because they allow us to comprehend and characterize a wide range of seemingly random materials and occurrences.