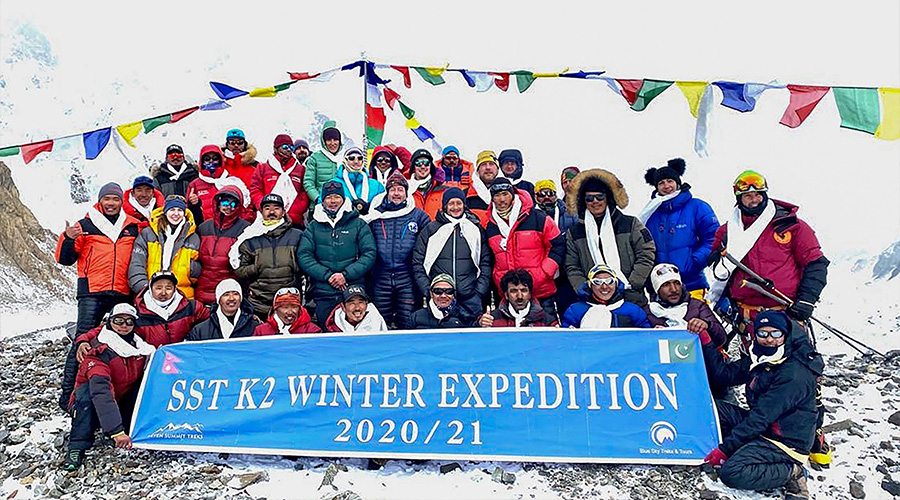 Ten Nepalese climbers who set a record on Saturday by scaling Pakistan’s K2 (8,611m), have arrived safely back at base camp, officials said.

Nepali climbers have made history when they became the first in winter to reach the summit of Pakistan’s K2, the world’s second-highest mountain at 8,611 meters (28,251 feet).

Nimsdai Purja, a climber one of the members of the group said that their team has reached the peak of 17:00 local time. One of the Spanish climbers died while returning by falling from a height. Many climbers have died in past wishing to achieve the same feat.

K2 is the highest mountain but 200 meters shorter than Mount Everest which is the part of the Karakoram range that straddles the Pakistan-China border. The most demanding mountain in winter among 8,000m peaks, higher than the rest 14 mountains.

This mountain is referred to as “the savage mountain”, the name given to it after George Bell who first attempted in 1953 from the U.S. In 2008 around 11 climbers were killed in an avalanche.

The initial 60 people spread into three to four teams out of which 10 Nepalese climbers made a single group for scaling K2 to let their name into the historic achievement list for the sake of Nepal’s dominant name.

The expedition also included the Icelandic mountaineer, assisted by the two Pakistanis John Snorri, Muhammad Ali Sadpara and Sajid Ali Sadpara who are some of the biggest names in the mountaineering world.

Mountaineer Nirmal Purja shared a picture of their group showing the celebration of their achievement confirmed by expedition organizer Seven Summit Treks.

“We are proud to have been a part of history for humankind and to show that collaboration, teamwork, and a positive mental attitude can push limits to what feel might be possible”. Said Mr. Purja.

In 1987-1988 the first attempt was made on K2 and until now no one was able to reach higher than 7,650 meters. Nepali guide is considered as the backbone of the climbing industry around the Himalayas and also helped many other mountain climbers and expeditions.

On social media, this news has sparked the joy of happiness for the climbing community and as well as within the Nepali community. For years Nepalis have assisted foreigners to reach the summits of the Himalayas.