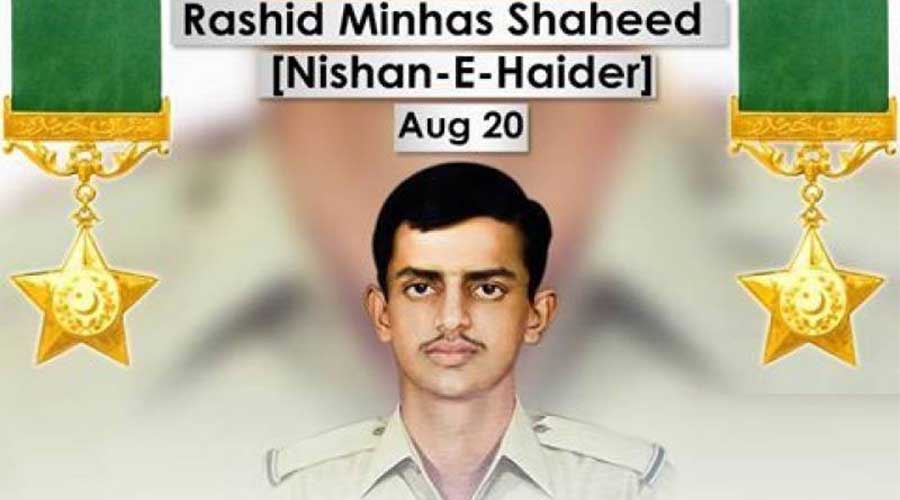 Rashid Minhas was born on 17 February 1951 and remains the youngest officer to have received the Nishan-e-Haider award and also the first receiver of the highest honor of gallantry for Pakistan Air Force.

Minhas was commissioned in Pakistan Air Force on 13 March 1971, in the 51st GD(P) Course. Just five months after joining PAF and still training to become a pilot, on 20 August, Rashid Minhas was en route for his second solo flight towards runway to take off in a T-33 jet trainer in Karachi, when a Bengali pilot instructor, Flight Lieutenant Matiur Rahman waved at him to stop and climbed on the instructor’s seat.

After some moments in the air the Bengali instructor redirected the Jet towards India. Soon the young officer realized the Jet has been hijacked and he radioed the signal to its PAF base. The air controller requested to share again his message in response to that he confirmed the hijacking and the day marked the martyrdom of Rashid Minhas.

After the incident investigation started which revealed that Flight Lieutenant Matiur Rahman wanted to go to India to join fellow citizens in the Bangladesh Liberation War. However, Rashid Minhas had done the only thing which he was in control to do and crashed the plane.

After taking control from instructor Rashid Minhas crashed the plane just 32 miles from the Indian border, consciously sacrificing his life for the integrity of Pakistan. After his death, Rashid Minhas was honored as a national hero.

In his early age, Minhas lived in the Lahore and later his family moved to Rawalpindi. To show solidarity and to remain in the memory Pakistan Air Force (PAF) changed Kamra Air Base name to PAF Base Minhas, frequently called Minhas-Kamra base.