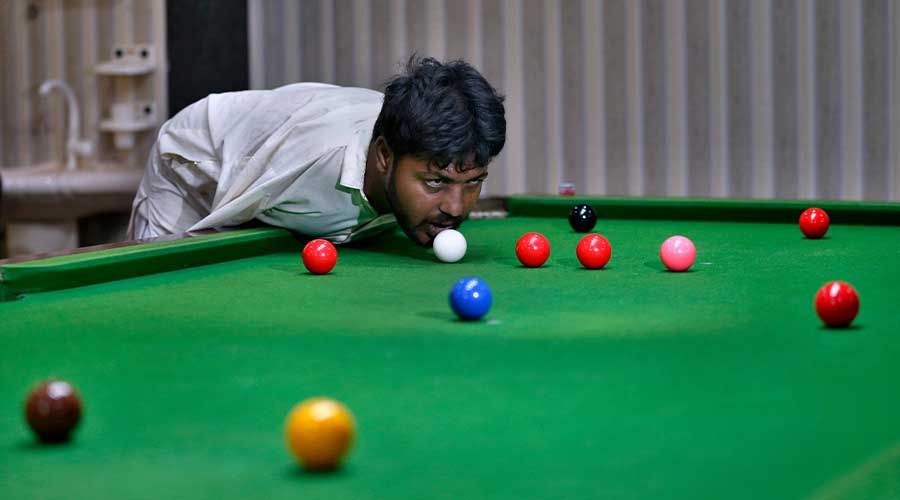 Muhammad Ikram who hails from Punjab was born without arms but nothing can stop him from fulfilling his childhood dream of playing his favorite game of snooker.

Playing with his chin, Ikram remembers watching other children playing snooker outside his home at the age of 10 but unable to do it, and he wanted to play his favorite game one day.

While talking with The Associated Press he said “At that time, I wished I had my arms so I could play the game too.” Sooner or later he invented his own playing style and went to the nearby snooker club for a game.

“People in the club didn’t believe that I could play with my chin,” he said. “But they gradually started admiring my skills when I started hitting the cue ball with my chin.”

The owner of the Cue Club in Samundri, Mohammad Nadeem remembered the time when Ikram came to him 10 or 12 years ago asking to play snooker and I told him that you cannot play this game. However, I’m glad Ikram did not lose hope and carried on with his dream.

“When he first hit the ball with his chin, it simply amazed me because it was as good as any other snooker player could have hit it with a cue in hand,” Nadeem said.

Ikram has won now three tournaments and his popularity keeps increasing in the surrounding areas. Ikram did not just attract attention within Pakistan but from international media as well.

In his family, Muhammad Ikram has five younger sisters and two younger brothers. “I don’t go out and watch him play but his father has seen him playing and we are happy for him,” Ikram’s mother, Razia Bibi, said.

“We used to say that had he got arms; he would have been very happy. But now the whole world will be happy when they see him playing.”

Muhammad Ikram also wanted to display his snooker abilities internationally and hoping to get government level support to accomplish his goal.

“I wish I could go abroad and play in front of other people and bring fame to Pakistan,” he talked while fixing his neck and potted the red ball with his chin in the long pocket.