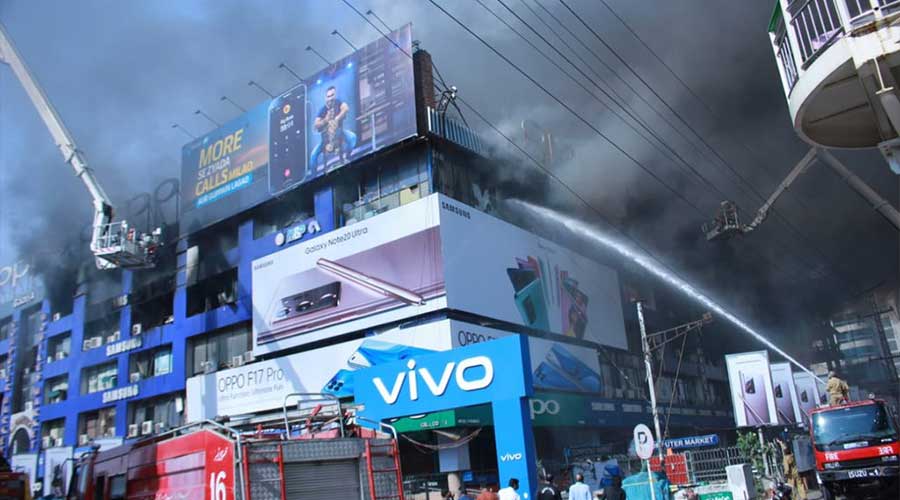 On Sunday morning, a massive fire erupted in Lahore at Hafeez Center plaza, Gulberg main boulevard area due to an electrical short circuit, spreading to the fourth floor of the building and firefighters are still trying to put out the blaze.

However, Deputy Commissioner (DC) Mudassir Riaz talked to the media and said that the Hafeez Center fire was now under controlled to much extent, they are now focusing on the parts of the building which are still under fire.

“Workers from Rescue 1122 and fire department are present at the site and are working on putting out the fire. Snorkels are also present and all resources will be utilized,” he said, adding that he was leading the efforts himself.

The Lahore Commissioner Zulfiqar Ahmad Ghuman has constituted an inquiry committee to look into the incident and directed it to submit a report within 24 hours. Officials from the Metropolitan Corporation of Lahore (MCL) and Rescue 1122 were also included.

Meanwhile, rescue officials said that the fire broke out due to the short circuit adding that a definite reason could only be given after the report was submitted. Punjab Chief Minister Usman Buzdar took notice of the incident and authorities are highly alert to put the fire out. Additional fire brigades have been sought from the Army.

“Priority should be given to rescuing people stuck inside [the building],” he said and directed “immediate investigation” into the incident.