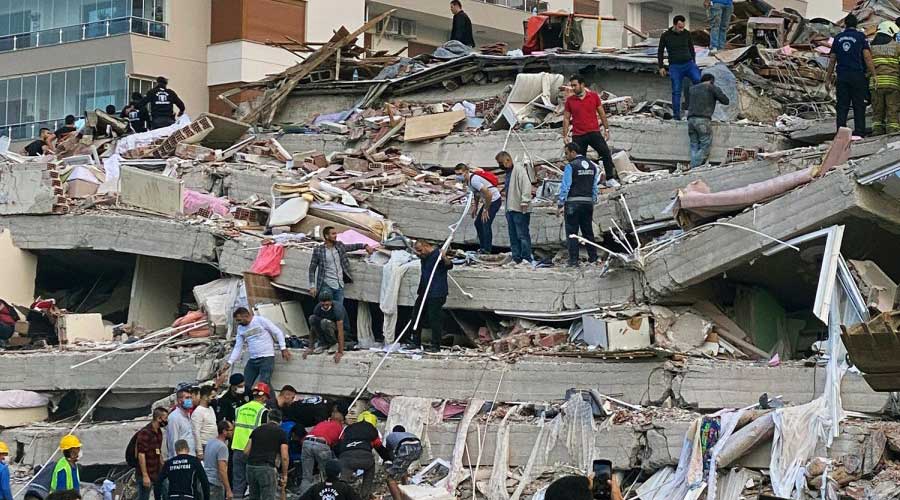 Prime Minister Imran Khan, on Saturday, offered condolences to the Turk President Recep Tayyip Erdogan and the people of Turkey after Turkey received a massive 6.6 jolt earthquake that shook Izmir city on Friday that has so far claimed the lives of 25 people and left at least 831 injured.

Premier Imran Khan in his tweet said that Pakistan stands with Turkey in this difficult time, just like Turkey stood with us during the devastating earthquake of 2005:

My condolences to President Erdogan & the people of Turkey on the loss of precious lives in Izmir earthquake. We stand with the Turkish nation, offering every help we can give. We can never forget the way Turkey stood with us when the devastating earthquake hit Pak & AJK in 2005

Ministry of Foreign Affairs representative shared a condolence note through their official Twitter account and said Pakistan is “Extremely anguished by news of earthquake in Izmir.”

Furthermore, the MoFA also expressed that the people of Pakistan always stand firm with their Turkish blood brothers.

The MoFA spokesperson while tweeting expressed best wishes and prayers for the people of Turkey and tagged the Turkish Foreign Minister in the post.

Extremely anguished by news of earthquake in Izmir, #Turkey, and people reportedly trapped in demolished buildings. Like always, people of #Pakistan are in strong solidarity with their Turkish brethren. Our best wishes and prayers!@MFATurkey

Earlier, a powerful earthquake hit Turkey and Greece which caused buildings to collapse as well as a sea surge that flooded streets in the Turkish city Izmir.

According to Greece media, the earthquake also caused a mini-tsunami on the eastern Aegean Sea island of Samos, resulting in damaged buildings.

According to the United States Geological Survey, the earthquake was recorded 14 kilometers off the Greek town of Karlovasi on Samos.

Furthermore, the Greece seismological agency measured the earthquake jolt at 6.7 magnitude, however, the Turkish official agency for detecting earthquake magnitude recorded a lower magnitude of 6.6.

“With all the means of our state, we stand by our citizens affected by the earthquake. We took action to start the necessary work in the region with all our relevant institutions and ministers,” Erdogan said.