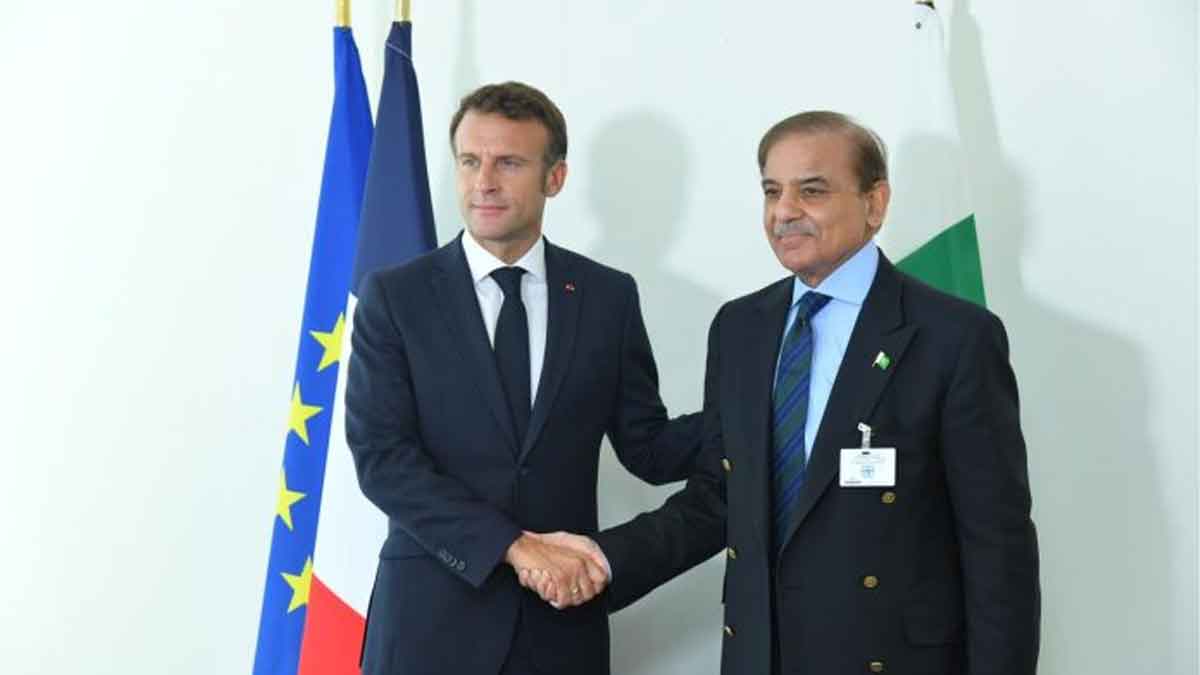 In the wake of the most recent severe floods brought on by climate change, France promised to cooperate toward restoring Pakistan’s economy.

Following a bilateral meeting on the sidelines of the 77th session of the UN General Assembly (UNGA) in New York, Prime Minister Shehbaz Sharif and French President Emmanuel Macron announced the decisions in a joint statement.

The meeting was the country’s prime minister’s first engagement with the head of a big European nation in seven years.

Additionally, it was determined that France would hold an international conference before the end of the year to aid in the rehabilitation and reconstruction of Pakistani citizens and flood-affected areas.

Along with exchanging opinions on how to improve bilateral ties, the two leaders of France and Pakistan decided to enlist international assistance in helping Pakistan recover and put its economy back on track.

Before the end of the year “France will host an international conference striving to contributing to the rehabilitation and the reconstruction of flood-affected areas of Pakistan and, with the help of climate-resilient reconstruction related financing, to accelerate the transition to renewable energy.” This is done to bring together the pertinent international financial partners and development partners.

The prime minister emphasized the significant priority that both bilaterally and within the framework of the European Union Pakistan gave to its long-standing cordial relations with France.

He underlined the role of significantly advancing the bilateral ties in several sectors, such as trade and investment, energy, agriculture, information technology, defence and security, and higher education.

The prime minister also thanked France for supporting the GSP+ programme, noting that it has improved trade and economy connections with both France and the European Union.

To assist Pakistan in its attempts to overcome the tremendous task and rebuild a robust infrastructure with the aid of international assistance, the two leaders decided to closely collaborate.

The French president’s prompt supply of tents, water pumps, and a medical team as well as its sympathy with Pakistan’s flood victims were all thanked by the prime minister of that country.

He informed the French president of the devastation caused on by the severe floods across Pakistan that were a result of climate change, as well as the government’s response to the critical situation.

The prime minister hoped that France will support government efforts during the time of recovery of economy and construction.

In spite of its small contribution to the global carbon footprint, the prime minister said Pakistan was among the countries most susceptible to its destruction, as evidenced by the recent floods.

He emphasized the possibilities for cooperation on climate change between the two nations as well as for collective worldwide action.

Because of objections made by a religious organization against France over the past few years about the blasphemy issue, the two countries’ ties have suffered.

Additionally, Shehbaz met privately with the leaders of Iran, Spain, and Austria. He also went to the UN Secretary General’s welcome gathering. Furthermore, there will be more bilateral meetings with Shehbaz is scheduled with other global leaders.