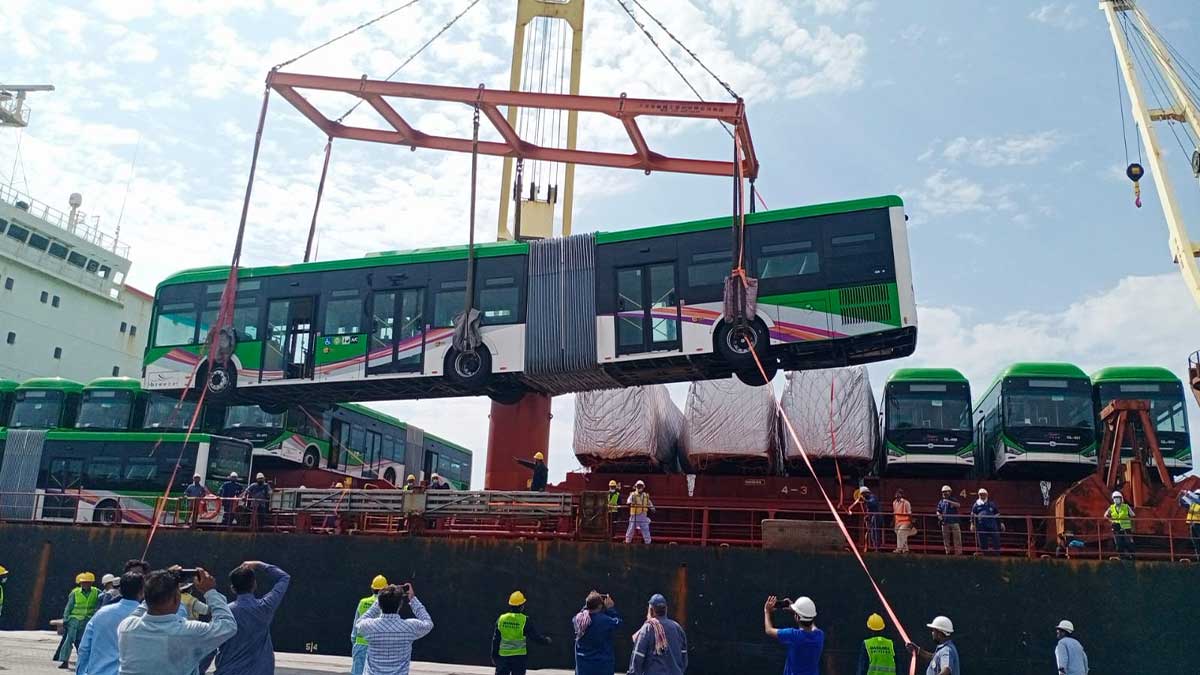 A ceremony regarding the delivery of the fleet was held at the Karachi Port in which Sindh Governor Imran Ismail said: “another milestone” had been accomplished with the onset of the buses included in the Karachi Transformation Plan (KTP) proclaimed by Prime Minister Imran Khan.

Furthermore, it was informed that this bus service move from Surjani Town to Gurumandir and Numaish Chowrangi in phase 1, covering most of the populated areas.

“The second consignment of 40 more buses [is] expected to reach in October 2021, and phase 1 of the project would be made operational by the end of November,” stated the governor.

The Green Line BRTS is one of Karachi’s major ongoing public transport projects which was likely to be completed by the end of 2017 but kept getting new deadlines and Karachiites had to suffer due to the lack of a suitable mass transit system. Since the start of the scheme, the shabby conditions of the roads have become a great source of annoyance and trouble not only for the travelers but also for the shopkeepers doing their businesses.

Besides this, federal minister for Planning, Development and Special Initiatives Asad Umar claimed that the Green Line BRTS was a modernized technology-based transport system, encompassing a 22-kilometer passageway aiming to provide relaxed mobility and supplying to the travel needs of 135,000 passengers per day.

“For the first time, we are bringing a modern transport system in Karachi,” the federal minister stated while feeling sorry that the most important city that contributed to taxes had been deprived of modern transport in the past.

Meanwhile, the minister informed that the buses would be operational from the next two months when relevant software would be installed and drivers are properly trained, as the pathways and stations had already been completed.

“This is the first project under the Karachi Transformation Plan, while five other mega-projects are underway,” Umar added.