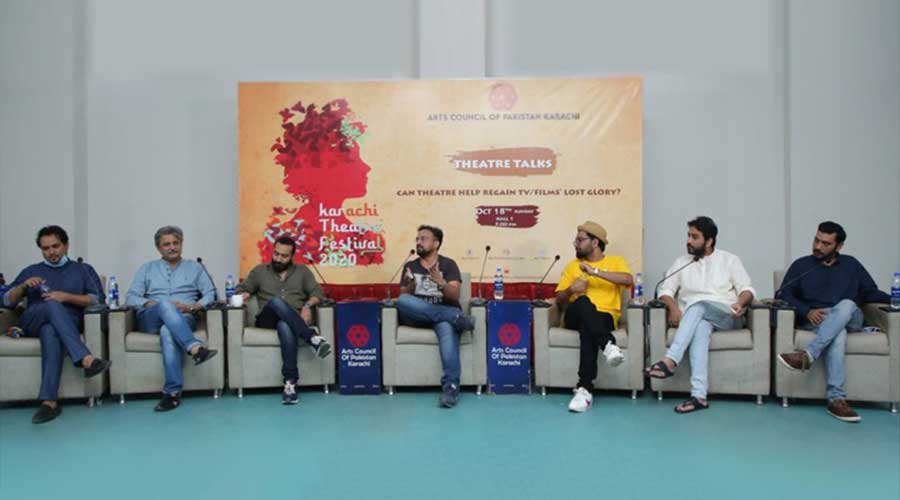 A panel discussion was carried out at the ongoing Karachi Theatre Festival 2020 by top Film and TV artists that shared the narrow-minded state of affairs in regard to theatre without any sugar coating. Dubbed ‘Can Theatre Help Regain TV/Film’s Lost Glory?’ the discussion focused more on the systematic apartheid against theatre actors.

Actor Yasir Hussain and writer Mohsin Ali both of whom come from a theatre background, shed light on how a jump into TV is seen as an economic necessity. “Survival in the theatre is very difficult. I was lucky enough to have a stint in commercial theatre. But for most of us, including me, the jump towards TV is because financial stability is close to impossible in theatre. If theatre artists were paid better and there was a framework in place to ensure their wellbeing, I wouldn’t have jumped to TV,” Hussain said.

On the stigma against theatre artists in the mainstream, Hussain was of the opinion that directors and producers who actually want progress should take a stand. “The directors who have earned a certain stature and by extension say in the industry really need to speak up for the ignored-yet-talented lot. If theatre artists can do well in India they can do well here,” he said.

Mohsin Ali while acknowledging that he was lucky in some ways when he branched out to TV as a writer, stressed that in most cases the cards are stacked against theatre artists. “The hurdles for theatre artists in terms of breaking into the mainstream would remain the same for the next 20 years.  Given my age at this point, I don’t see the point in giving anyone including myself false hope,” he said.

“If you talk about my struggle, I have been lucky enough to work with directors that have explained the shift in medium-well. But generally, it’s very hard. The failure rate is 98%,” Ali said.

“I think that it’s very sad that we couldn’t create opportunities for these (theatre) actors. There is a lot of involvement from the management side that makes it difficult to cast certain actors,” Jawani Phir Nahi Aani director Nadeem Baig told the audience. “But I think TV’s aristocracy is about to end soon. In the next few years you might see theatre artists that are crossing over to TV, in more, prominent roles.”

Namaloom Afraad director, Nabeel Qureshi talked about how being in a creative supervisory line of work, he feels a sense of responsibility towards uplifting theatre artists. “I always try to give back to the theatre by casting theatre actors in my films. As a theatre actor, you don’t have much of a choice than transitioning into film and making a name for yourself,” he said.

“It’s easier if I work with a trained actor from theatre. I understand the medium is different but at least a trained actor, be it from anywhere would have some know how. It takes less time to work with them.”