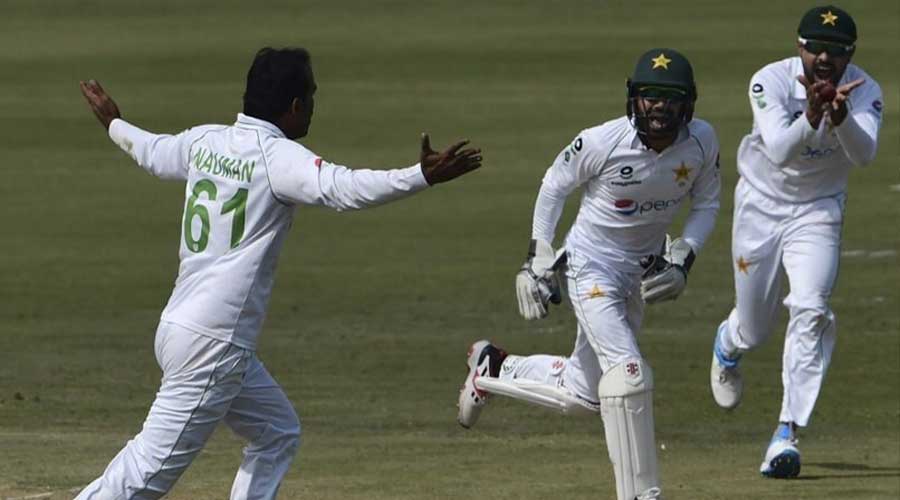 Nauman Ali enjoyed a maiden five-wicket haul and Fawad convert even his third half-century into a hundred to help Pakistan win the first Test against South Africa in Karachi.

The hosts lost openers Abid Ali and Imran Butt to fall to 23-2 when requiring 88, having bowled out the Proteas for 245 in the first session on day four.

However, Test captain Babar Azam made 30 and in spite of his removal from the wickets, Pakistan was on the verge of victory. First-innings centurion Fawad Alam hit the winning boundary to secure a victory of seven wickets. Meanwhile, Azhar Ali ended unbeaten on 31.

South Africa has now lost eight straight tests abroad. Proteas restarted on 187-4, but for the loss of their final six wickets, they managed to add only another 58 runs, debutant Nauman taking four of them as he finished with 5-35 from 25.3 overs.

On the first ball of the day, Maharaj was dismissed, bowled by one that held the paceman, Hasan Ali, a bit short.

After Maharaj, the South African captain Quinton de Kock became the victim of Yasir Shah, which was the fourth wicket for leg spinner of the innings.

Nauman took over from then on, however, he worked his way through the tail, and although Temba Bavuma fought hard, when trapped lbw by the left-arm spinner for 40, the batsman was the last man out.

When he dismissed both opening batsmen immediately after the lunch break, Anrich Nortje gave the tourists a glimmer of hope, but South Africa would rue a late clatter of wickets on day 3 having fought so hard with the bat to wipe out a 168th first-innings deficit.

Nauman was Pakistan’s fourth oldest debutant in the format, at 34 years and 111 days. However, as he finished with impressive match figures of 7-73, the wait proved worthwhile.

Though Yasir claimed De Kock’s main scalp, it was his fellow slow bowler who ensured that the home team was left on a tired pitch with a reasonable total exhibiting visible signs of an unpredictable bounce.

While showing dominance in the batting Fawad Alam was named as the player of the match.