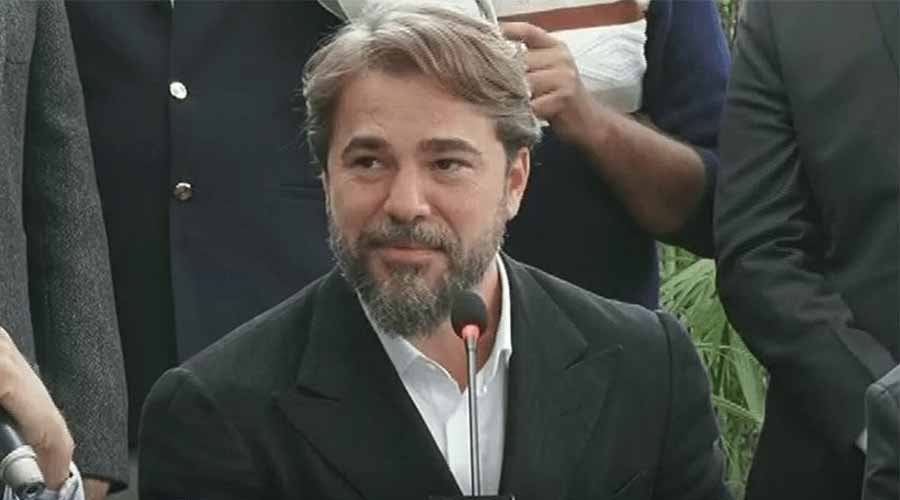 Turkish actor Engin Altan Duzyatan, who reportedly landed in Pakistan upon invitation of a private business company on Thursday addressed Pakistanis in a press talk where he said that he is ready to work in Pakistani dramas if he gets a good story.

Moreover, he also showed off his Urdu skills in a press conference. In a video on Instagram, he was asked to share a few words that he learned on his first visit.  “I know shukria [thank you] and Lahore Lahore hai [Lahore is Lahore],” he said.

The photos and videos of Engin Altan are circulating on social media, where the actor can be seen receiving love and hero’s welcome from the officials and fans in Pakistan.

“I would like to express my heartfelt gratitude to Imran Khan for praising Diriliş: Ertuğrul,” said the 41-year-old actor.

Addressing a press conference in Lahore on Friday, Engin Altan, who portrays the titular role in the historical drama series Dirilis: Ertugrul, hinted at working in Pakistani dramas and revealed that he had signed some new projects in Pakistan, he also told the press that he was set to become a brand ambassador for a private textile company.

However, while in a press, he expressed interest to visit the northern areas of Pakistan as sites are well-known to be the most beautiful areas of the world. He also said that Pakistan is a beautiful country.

“Pakistan is so beautiful! The sceneries are gorgeous, the mountains and the surrounding areas are breathtaking. I love the Lahori food as well! It’s a bit spicy but very tasty.”

He further said, “I think both Turkish people and Pakistani people love well-crafted stories. Turkish series are successful at conveying a touching sense of drama to the audience.”

“We know for a fact that Turkey became an even popular tourist destination after the TV series was released, which is great. We are really glad it happened.”