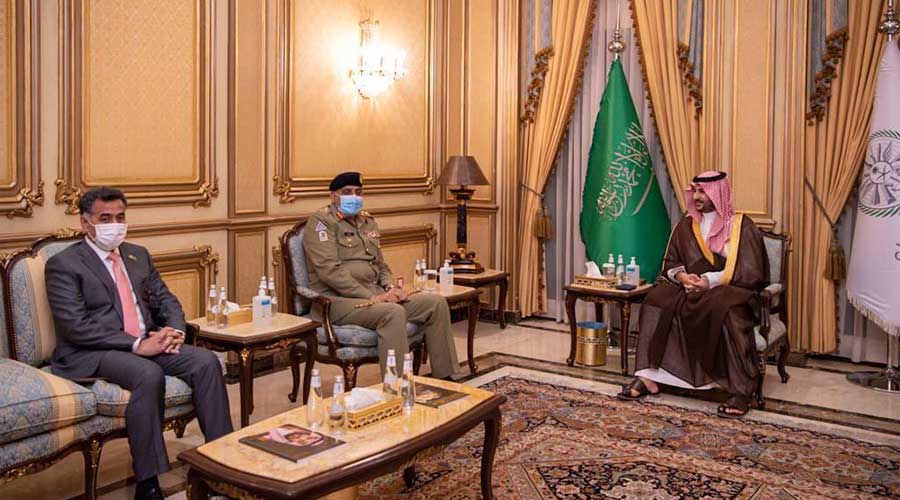 Chief of Army Staff General Qamar Javed Bajwa arrived on Monday in the Kingdom in a planned visit to meet the defense leadership. The meeting agenda was based on enhancement in the military to military ties which includes troops training program, according to official statement.

According to ISPR COAS General Bajwa was received by Fayyad Al-Ruwaili the Chief of the General Staff of the Armed Forces of Saudi Arabia on the arrival of Pak Army Chief at Defense Ministry.

“COAS Bajwa was received by Saudi Arabia’s Chief of the General Staff of the Armed Forces General Fayyad Al-Ruwaili upon his arrival at the defense ministry,” the ISPR.

In his visit, General Bajwa also had a meeting with the Commander of the Joint Forces Lieutenant General Fahad bin Turki Al Saud, the commander of Joint Forces in Saudi Arabia.

“During the meeting, prospects for military cooperation and ways to support and boost it were reviewed, in addition to matters of common concern,” said by Saudi Officials in a statement.

The Director General of Inter-Services Intelligence (ISI) Lt General Faiz Hameed was also accompanied by Pakistan Army Chief to display a stronger and meaningful bond between both countries.