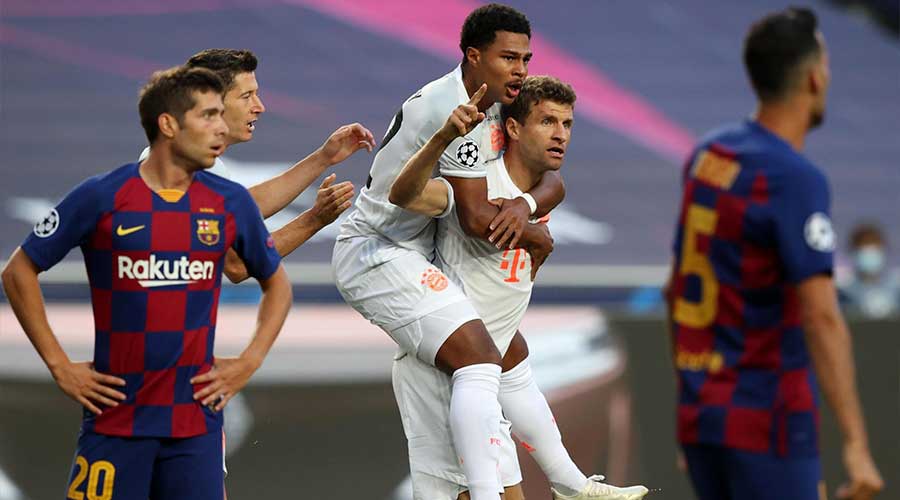 The Bundesliga champions Bayern Munich knocked Barcelona out from UEFA Champions League quarter-finals stage as they hammered Barcelona 8-2 and book their spot in semi-finals of the tournament in an extraordinary style.

The world’s best soccer player Lionel Messi looked miserable throughout the match as he was unable to do anything to get his team out from the humiliation.

In the start, both Bayern and Barcelona played attacking football but the game slid away from Barcelona when they conceded four goals in the first half of the game and later in the second half Barcelona loaned player Phillip Coutinho gave further blows to his parent club by striking two amazing goals and one assist in the last ten minutes of the game.

Bayern Munich star player Thomas Muller opened up the first goal which later equaled by David Alaba’s own goal but Ivan Perisic and Serge Gnabry added two more goals within 27 minutes of the gameplay. Before the halftime, Muller piled further misery for Catalonia side as he scored his second of the game.

At the start of the second half, Luiz Suarez showed some resistance as he scored a brilliant goal and closed down the deficit but Bayern was not in the mode to stop.

Joshua Kimmich reestablished three goals lead when Alphonso Davies provided an assist. Then comes Phillip Coutinho from the bench who assisted a goal to Robert Lewandowski who is enjoying the season and has scored 60+ goals.

On the 85th minute of the gameplay loaned Coutinho struck his first goal of the game and then on 89th his second. As a parent club, the Brazilian star did not celebrate both goals.

The match was the darkest day for the Blaugrana’s history as it was the first time Barca conceded 8 goals in a single match since 1946.

After Niko Kovac, Hansi Flick took over the responsibilities at Bayern and wanted to grab the opportunity of treble success as they already won their straight 8th Bundesliga title and 20th DFB-Pokal.

According to Journalist Fabrizio Romano, Barcelona could sack Quique Setien after horrible show against Bayern Munich and replace him with other possible options such as Xavi, Massimiliano Allegri, or former Tottenham boss Mauricio Pochettino.