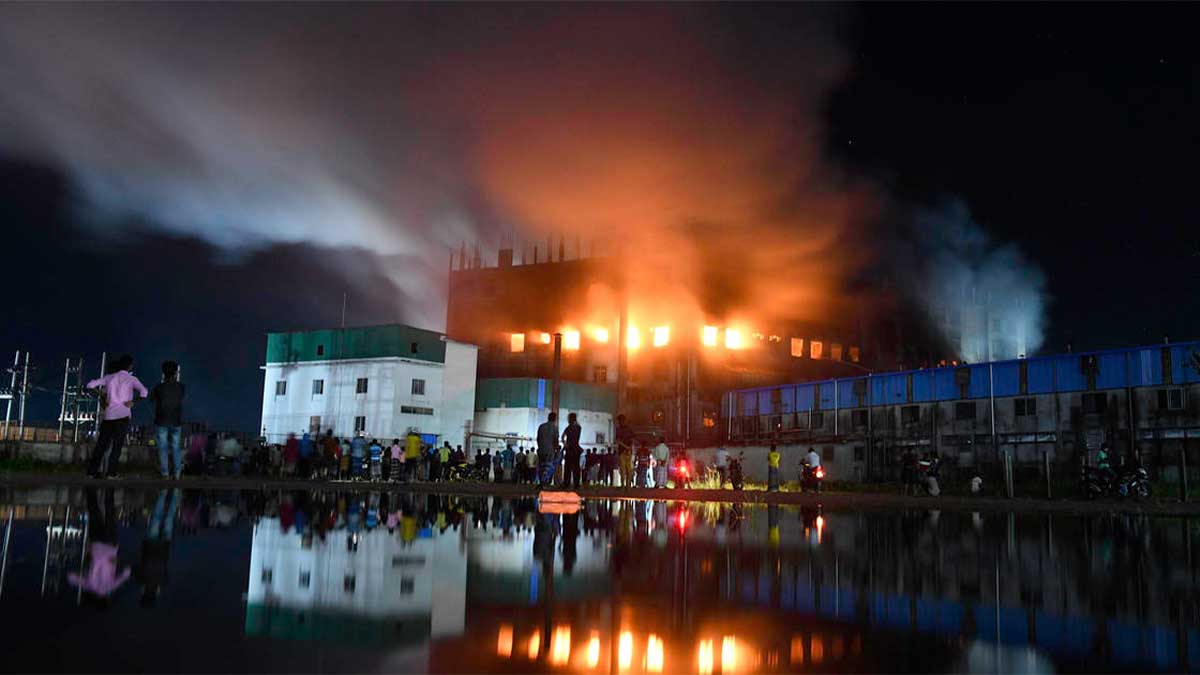 Bangladesh police have arrested the owner of a factory where at least 52 people died in a fire, as it emerged that children as young as 11 had been working there.

Police said the owner of the food factory and four of his sons were among eight people detained over the fire that broke out on Thursday and raged for more than a day.

According to fire officials, a fire overtook a food and beverage factory outside of Bangladesh’s capital, killing at least 52 workers, many of whom were trapped inside by an illegally barred door.

The fire broke out at the five-story Hashem Foods Ltd. factory in Rupganj, just outside of Dhaka, on Thursday night, sending large clouds of black smoke into the sky. The death toll was first given as three, but after the fire was put out, police uncovered heaps of bodies on Friday afternoon.

According to Debasish Bardhan, deputy director of the Fire Service and Civil Defense, 52 bodies have been recovered so far, but the top two floors of the factory have yet to be searched.

He claimed that the factory’s main exit was locked from the inside, trapping many of those who died.

According to the United News of Bangladesh agency, many workers jumped from the factory’s upper floors, injuring at least 26 people.

It was not immediately clear how many individuals were in the factory and how many had gone missing.

“For the time being, we only have these specifics. We’ll be able to get a complete picture after searching the top floors,” Bardhan said.

According to Kazi Abdur Rahman, the group’s senior general manager for export, the factory that caught fire Thursday was a subsidiary of Sajeeb Group, a Bangladesh firm that makes juice for Pakistan’s Lahore-based Shezan International Ltd.

The company exports its products to a number of countries, including Australia, the United States, Malaysia, Singapore, India, Bhutan, Nepal, and countries in the Middle East and Africa, according to the group’s website.

History of factory fire in Bangladesh

Bangladesh has a dismal history of industrial disasters, including factories catching fire and engulfing the workers. Continuing corruption and poor oversight have resulted in numerous deaths over the years, and major international brands that hire tens of thousands of low-paid workers in Bangladesh have come under intense pressure to increase factory conditions following fires and other disasters that killed thousands of people.

Previous industrial disasters have been blamed on safety violations, which continue to haunt the South Asian country spite of the rapid economic progress.

Around 117 workers were killed in a textile factory in Dhaka in 2012 when they were trapped behind locked exits.

The largest industrial tragedy in Bangladesh occurred the following year, when the Rana Plaza garment factory outside of Dhaka collapsed, killing over 1,100 people.

A fire blasted through a 400-year-old region packed with apartments, stores, and warehouses in Dhaka’s oldest neighbourhood in February 2019, killing at least 67 people. In 2010, another fire in Old Dhaka killed at least 123 individuals in a residence that was illegally storing chemicals.

Bangladesh’s regulatory structure and inspections “had not been able to keep pace with the development of the industry,” according to a 2017 assessment by the International Labor Organization.