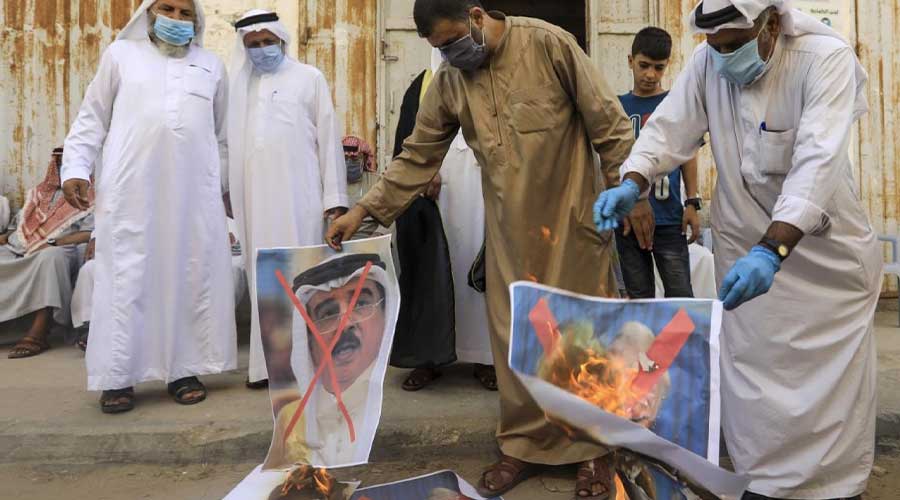 Bahrainis took to social media throughout the weekend to voice strong opposition to the normalization deal with Israel, which many called an “act of treason.”

The response was way harsher than the one seen in the United Arab Emirates, including heavy criticism directed towards the government for reaching the deal with Israel.

Tweets were floating with the trend “Bahrainis against normalization” on Twitter after a deal towards regular relations between Bahrain and Israel was announced.

A leading member of the Al-Wefaq National Islamic Society Majed Milad said that “It is an illusion that the Bahraini people enter the tunnel of normalization. The Egyptian people up to the moment have their heads raised against normalization.”

Maryam Al-Khawaja the Human rights activist was also among the opposition to the deal with Israel and she shared tweets in which she said, “The Bahrainis are not free, nor do they have any say in what the regime does or decides, locally or internationally. The fight for justice and freedom continues.”

Furthermore, Jawad Fayrouz a former policymaker also shared his opinion that: “The largest and most horrific crime committed by the ruling authority in Bahrain in its history against the people, the homeland and the Arab and Islamic nations, and human values is normalization with the Zionist entity.”

Bahrain government and Israel officials both settled to begin a full state level relationship after the United Arab Emirates (UAE) accepted Israel as a state and started normal ties with the Jewish state last month.

The state level normalization was done through a telephone call between Bahrain King Hamad bin Isa Al Khalifa and Israeli Prime Minister Benjamin Netanyahu. The bond between the two countries was announced by US President Donald Trump on Twitter.

The deal between Bahrain and Israel was criticized by Palestinian political party and Palestinian officials and recalled its ambassador to Manama.

After making an agreement with Israel, Bahrain becomes the fourth Arab country to have a diplomatic relationship with Israel. The first country that made a pact with Israel was Egypt in 1979 and then Jordan in 1994 and then UAE in August 2020.