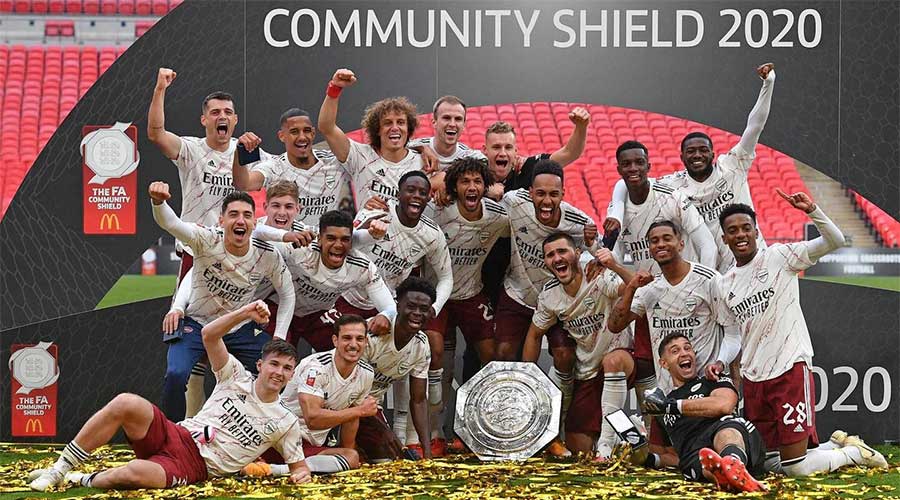 The North London club Arsenal claimed their second trophy in August as the FA Cup winners beat Barclays Premier League Champions Liverpool on penalties after 1-1 draw in the community shield.

Pierre-Emerick Aubameyang who struck twice to seal the victory over Chelsea at Wembley when Gunners triumph FA Cup and now again a hero in the Community Shield as well.

However, Liverpool’s Rhian Brewster who enjoyed playing with Liverpool’s pre-season missed his penalty kick which was the key moment for Gunners to seal the Wembley victory.

Liverpool potted the ball in the net when defender Virgil Van Dijk headed the ball in 7th minute of the gameplay but it was ruled offside.

Liverpool started the match with push strategy but Arsenal beaten that press and advanced towards opponent goal post as Bikayo Saka picked up Aubameyang with an excellent cross who cleared Neco Williams and keeper Allison and converted a beautiful 20-yard goal.

In the second half, Kloop brought out his substitution and introduced Naby Keita and Minamino which impacted the game. After cameo with Mohamed Salah, Minamino was finally able to net the ball after a rebound fell his way.

But in the end, it was Arsenal who got on top as Aubameyang calmly sent Allison the wrong way upon kicking his final penalty against Liverpool.

Mikel Arteta a former Arsenal player and former assistant coach of Pep Guardiola at City had two trophies in his cabinet as a coach, and Arsenal is looking very sharp under his leadership.

Excellent Aubameyang who is set to sign a new contract with Gunners is looked to be a different player while playing at Wembley, the player increased his goal tally at the national stadium to five which made him joint top scorer along with Alexis Sanchez.