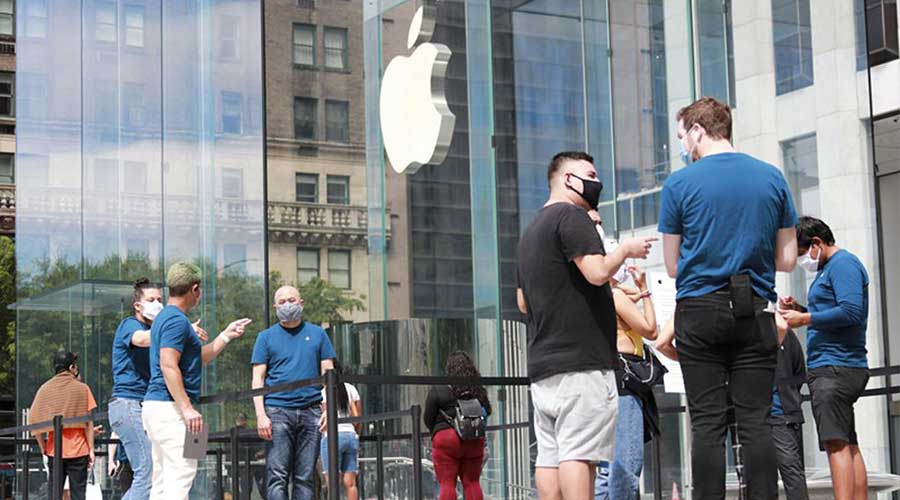 Apple reported record growth in third quarter during the pandemic primarily due to launch of the iPhone SE and iPad and Mac sales.

The COVID-19 pandemic along with bringing death and destruction also brought the economies of the world to its knees. As the economies shrunk due to coronavirus pandemic some capitalized on the unprecedented situation and gained from the difficult times and Apple is one of them. The pandemic was very kind to Apple as the tech giant witnessed an increase in growth. Work from home and stimulus checks (government support during COVID-19 for unemployed) were the reasons Apple set new sales records in a number of categories.

Starting from Apple iPhone, which recorded an improvement in revenue by 2 percent in the third quarter.

“In April, we expected year-over-year performance to worsen, but we saw better than expected demand in May and June,” said CEO Tim Cook. “We attribute this increase in demand to several interactive causes, including a strong iPhone SE launch, continued economic stimulus, and potentially some benefit from shelter-in-place restrictions lifting around the world,” he explained.

Many of the unemployed people who were struggling to put food on their tables and pay their bills instead of buying the essential items went to Apple stores to buy new iPhone while using government funding.

Tim Cook also revealed that the majority of the Android users shifted towards iPhone from Android in the last year as they find iPhone SE economical.

Although Cook believed that iPhone 11 is the best product of Apple and it’s the most favorite phone out there but iPhone SE with an affordable price became a major factor of boosting revenue.

Apple expects the same flow in the revenue in the September quarter also and believes that revenue will jump after the release of Apple’s new model iPhone 12 lineup.

App Store, Apple Music, Cloud services, and other services such as iMessage, Siri and FaceTime usage also increased. Overall the service category increased by 15 percent which sets another record.

It shows that people are relying on not only iPhone but also Apple services in the pandemic to stay in touch with friends and family and also connect with businesses and education programs.

Apart from Apple’s iPhone growth, Apple saw a tremendous 22 percent escalation in its Mac sales, and iPad sales are standing at 31 percent, which makes the highest quarterly revenue for the product category that Apple has seen in 8 years.

MacBook Air and iPad Pro 2020 are the main reason behind an increase in growth as work from home is the key in the future and investing in laptops, computers or tablets is understandable.

The only thing which is not thriving is Apple’s wearables as their growth has decelerated.