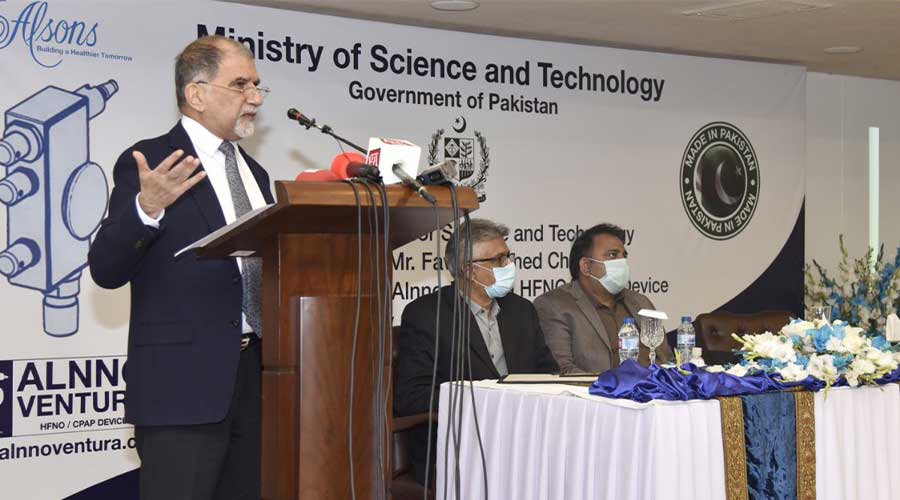 The Federal Minister for Science and Technology Fawad Chaudhry announced the launching of a locally developed respiratory device.

The Minister held the national launch of the Alnno-Ventura HFNO device, the UK qualified, a sophisticated respiratory device developed in Pakistan by Alsons Group. He himself hosted the event, government officials, and foreign dignitaries, as well as senior members of the medical fraternity, attended the event.

Alsons Group has entered the medical equipment manufacturing industry by developing a lifesaving device that is safe, effective, cost-efficient, and easy to use.

The Alnno-Ventura follows the designs and specifications of the UCL Ventura manufactured under license and instructions from UCL Institute of Healthcare Engineering in the UK.

The ministry said the global pandemic caused by the rapid spread of Covid-19 has led to a disruption and health emergency of unprecedented magnitude. “With most medical equipment being in short supply globally due to the pandemic, as well as being a third world country with the limited medical infrastructure it was imperative that Pakistan become self-reliant and able to look after its own needs,” the minister said.

This Pakistan Engineering Council and the Ministry of Science and Technology supported developed device is the first locally manufactured respiratory device to have been approved for medical use by the Drug Regulatory Authority of Pakistan (Drap).

Meanwhile, the Minister also said, “We are convinced we can do it. When corona started spreading, we were importing everything. But there was a severe shortage of masks and other protective gear. We worked first with Pakistan Council for Scientific and Industrial Research and then with Defence Productions. We received 57 designs and seven were shortlisted. Ventilators are now being produced entirely in Pakistan, restoring our belief that we can.”